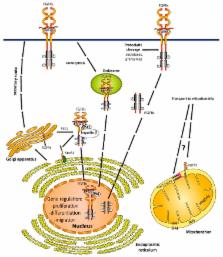 Fibroblast growth factor receptors (FGFRs) in response to fibroblast growth factors (FGFs) transmit signals across the cell membrane, regulating important cellular processes, like differentiation, division, motility, and death. The aberrant activity of FGFRs is often observed in various diseases, especially in cancer. The uncontrolled FGFRs’ function may result from their overproduction, activating mutations, or generation of FGFRs’ fusion proteins. Besides their typical subcellular localization on the cell surface, FGFRs are often found inside the cells, in the nucleus and mitochondria. The intracellular pool of FGFRs utilizes different mechanisms to facilitate cancer cell survival and expansion. In this review, we summarize the current stage of knowledge about the role of FGFRs in oncogenic processes. We focused on the mechanisms of FGFRs’ cellular trafficking—internalization, nuclear translocation, and mitochondrial targeting, as well as their role in carcinogenesis. The subcellular sorting of FGFRs constitutes an attractive target for anti-cancer therapies. The blocking of FGFRs’ nuclear and mitochondrial translocation can lead to the inhibition of cancer invasion. Moreover, the endocytosis of FGFRs can serve as a tool for the efficient and highly selective delivery of drugs into cancer cells overproducing these receptors. Here, we provide up to date examples how the cellular sorting of FGFRs can be hijacked for selective cancer treatment.

Christopher Greenman, Philip Stephens, Raffaella Smith … (2007)
Cancers arise owing to mutations in a subset of genes that confer growth advantage. The availability of the human genome sequence led us to propose that systematic resequencing of cancer genomes for mutations would lead to the discovery of many additional cancer genes. Here we report more than 1,000 somatic mutations found in 274 megabases (Mb) of DNA corresponding to the coding exons of 518 protein kinase genes in 210 diverse human cancers. There was substantial variation in the number and pattern of mutations in individual cancers reflecting different exposures, DNA repair defects and cellular origins. Most somatic mutations are likely to be 'passengers' that do not contribute to oncogenesis. However, there was evidence for 'driver' mutations contributing to the development of the cancers studied in approximately 120 genes. Systematic sequencing of cancer genomes therefore reveals the evolutionary diversity of cancers and implicates a larger repertoire of cancer genes than previously anticipated.

Xiuqin Zhang, Omar Ibrahimi, Shaun Olsen … (2006)
In mammals, fibroblast growth factors (FGFs) are encoded by 22 genes. FGFs bind and activate alternatively spliced forms of four tyrosine kinase FGF receptors (FGFRs 1-4). The spatial and temporal expression patterns of FGFs and FGFRs and the ability of specific ligand-receptor pairs to actively signal are important factors regulating FGF activity in a variety of biological processes. FGF signaling activity is regulated by the binding specificity of ligands and receptors and is modulated by extrinsic cofactors such as heparan sulfate proteoglycans. In previous studies, we have engineered BaF3 cell lines to express the seven principal FGFRs and used these cell lines to determine the receptor binding specificity of FGFs 1-9 by using relative mitogenic activity as the readout. Here we have extended these semiquantitative studies to assess the receptor binding specificity of the remaining FGFs 10-23. This study completes the mitogenesis-based comparison of receptor specificity of the entire FGF family under standard conditions and should help in interpreting and predicting in vivo biological activity.

D. Ross Camidge, William Pao, Lecia V. Sequist (2014)
The use of advanced molecular profiling to direct the use of targeted therapy, such as tyrosine kinase inhibitors (TKIs) for patients with advanced-stage non-small-cell lung cancer (NSCLC), has revolutionized the treatment of this disease. However, acquired resistance, defined as progression after initial benefit, to targeted therapies inevitably occurs. This Review explores breakthroughs in the understanding and treatment of acquired resistance in NSCLC, focusing on EGFR mutant and ALK rearrangement-positive disease, which may be relevant across multiple different solid malignancies with oncogene-addicted subtypes. Mechanisms of acquired resistance may be pharmacological (that is, failure of delivery of the drug to its target) or biological, resulting from evolutionary selection on molecularly diverse tumours. A number of clinical approaches can maintain control of the disease in the acquired resistance setting, including the use of radiation to treat isolated areas of progression and adding or switching to cytotoxic chemotherapy. Furthermore, novel approaches that have already proven successful include the development of second-generation and third-generation inhibitors and the combination of some of these inhibitors with antibodies directed against the same target. With our increased understanding of the spectrum of acquired resistance, major changes in how we conduct clinical research in this setting are now underway.