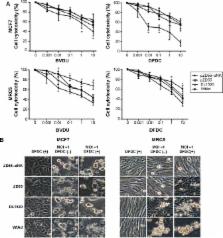 To enhance the anti-tumor efficacy of Dm-dNK and maintain its substrate specificity and safety control in the meantime, the conditionally replicative gene–viral system, ZD55–dNK (which contains the selective replication adenovirus, ZD55, encoded with Dm-dNK), was investigated in pushing a deeper development of this strategy. Selective replication, cell killing efficacy, and cytotoxicity, in combination with chemotherapy, were applied to two breast cell lines (MDA231 and MCF7 cells), two normal cell lines (WI38 and MRC5 cells), and the MCF7 xenograft model in vivo.

The concomitant use of ZD55–dNK and DFDC is possibly a novel and promising approach to breast cancer treatment, and further investigation on the safe control of excessive virus replication and the efficacy of this approach in humans is warranted.

Antiviral drug discovery and development: where chemistry meets with biomedicine.

Erik De Clercq (2005)
The successful development of antiviral drugs is highly dependent on a close interaction and collaboration between the chemist and the biologist (biomedic). This is illustrated by a number of representative examples: S-adenosylhomocysteine (SAH) hydrolase inhibitors which display broad-spectrum antiviral activity, bromovinyldeoxyuridine (BVDU) and derivatives thereof, that are highly selective inhibitors of varicella-zoster virus (VZV), (dideoxy)nucleoside reverse transcriptase inhibitors (NRTIs) and non-nucleoside reverse transcriptase inhibitors (NNRTIs) which are now widely used in the treatment of HIV infections (AIDS), the bicyclams (i.e. AMD3100) which were originally discovered as anti-HIV agents, then found to be potent CXCR4 antagonists and now being pursued for a number of indications such as stem cell mobilization, and the acyclic nucleoside phosphonates which have heralded a new strategy for the treatment of various DNA virus (herpes-, adeno-, pox-, papillomavirus) infections (cidofovir), hepatitis B (adefovir) and AIDS (tenofovir).

L. Sun,  Wei Zou,  B. C. Luo … (2003)
ONYX-015 is an attractive therapeutic adenovirus for cancer because it can selectively replicate in tumor cells and kill them. To date, clinical trials of this adenovirus have demonstrated marked safety but not potent enough when it was used alone. In this paper, we put forward a novel concept of Gene-ViroTherapy strategy and in this way, we constructed an armed therapeutic oncolytic adenovirus system, ZD55-gene, which is not only deleted of E1B 55-kD gene similar to ONYX-015, but also armed with foreign antitumor gene. ZD55-gene exhibited similar cytopathic effects and replication kinetics to that of ONYX-015 in vitro. Importantly, the carried gene is expressed and the expression level can increase with the replication of virus. Consequently, a significant antitumoral efficacy was observed when ZD55-CD/5-FU was used as an example in nude mice with subcutaneous human SW620 colon cancer. Our data demonstrated that ZD55-gene, which utilizing the Gene-ViroTherapy strategy, is more efficacious than each individual component in vivo.

Juraj Hlavaty,  Daniel Portsmouth,  Matthias Renner (2007)
The principle of using suicide genes for gene directed enzyme prodrug therapy (GDEPT) of cancer has gained increasing significance during the 20 years since its inception. The astute application of suitable GDEPT systems should permit tumour ablation in the absence of off-target toxicity commonly associated with classical chemotherapy, a hypothesis which is supported by encouraging results in a multitude of pre-clinical animal models. This review provides a clear explanation of the rationale behind the GDEPT principle, outlining the advantages and limitations of different GDEPT strategies with respect to the roles of the bystander effect, the immune system and the selectivity of the activated prodrug in contributing to their therapeutic efficacy. An in-depth analysis of the most widely used suicide gene/prodrug combinations is presented, including details of the latest advances in enzyme and prodrug optimisation and results from the most recent clinical trials.