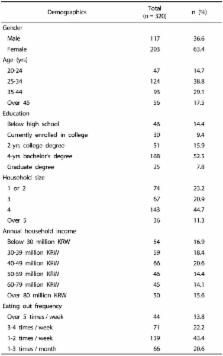 Publisher: The Korean Nutrition Society and the Korean Society of Community Nutrition

Obesity is a serious concern worldwide, for which the restaurant industry holds partial responsibility. This study was conducted to estimate restaurant consumers' intention to select healthy menu items and to examine the relationships among behavioral beliefs, past behaviors, attitudes and behavioral intentions, which are known to be major determinants of consumer behaviors.

An online, self-administered survey was distributed for data collection. The study sample consisted of customers who reported having visited casual dining restaurants in the last three months at the time of the survey. Structural equation modeling was used to verify the fit of the proposed research model.

This study contributes to the available literature regarding obesity by adding past behaviors, one of the most influential variables involved in prediction of future behaviors of consumers, to the TPB model, enabling a better understanding of restaurant consumers' rational decision process regarding healthy menu choices. The results of this study provide practical implications for restaurant practitioners and government agencies regarding ways to promote healthy menus.

Attitude-behavior relations: A theoretical analysis and review of empirical research.

Choice of Travel Mode in the Theory of Planned Behavior: The Roles of Past Behavior, Habit, and Reasoned Action

The theory of planned behavior and healthy eating.