Forced oscillation technique for early detection of the effects of smoking and COPD: contribution of fractional-order modeling 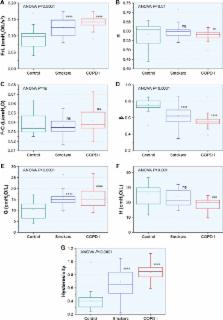 The aim of the present study was to evaluate the performance of the forced oscillation technique (FOT) for the early diagnosis of the effects of smoking and COPD. The contributions of the integer-order (InOr) and fractional-order (FrOr) models were also evaluated.

Initially, it was observed that traditional FOT parameters and the InOr and FrOr models provided a consistent description of the COPD pathophysiology. Mild COPD introduced significant increases in the FrOr inertance, damping factor and hysteresivity ( P<0.0001). These parameters were significantly correlated with the spirometric parameters of central and small airway obstruction ( P<0.0001). The diagnostic accuracy analyses indicated that FOT parameters and InOr modeling may adequately identify these changes (area under the receiver operating characteristic curve – AUC >0.8). The use of FrOr modeling significantly improved this process ( P<0.05), allowing the early diagnosis of smokers and patients with mild COPD with high accuracy (AUC >0.9).

FrOr modeling improves our knowledge of modifications that occur in the early stages of COPD. Additionally, the findings of the present study provide evidence that these models may play an important role in the early diagnosis of COPD, which is crucial for improving the clinical management of the disease.

Measuring the accuracy of diagnostic systems.

J Swets (1988)
Diagnostic systems of several kinds are used to distinguish between two classes of events, essentially "signals" and "noise". For them, analysis in terms of the "relative operating characteristic" of signal detection theory provides a precise and valid measure of diagnostic accuracy. It is the only measure available that is uninfluenced by decision biases and prior probabilities, and it places the performances of diverse systems on a common, easily interpreted scale. Representative values of this measure are reported here for systems in medical imaging, materials testing, weather forecasting, information retrieval, polygraph lie detection, and aptitude testing. Though the measure itself is sound, the values obtained from tests of diagnostic systems often require qualification because the test data on which they are based are of unsure quality. A common set of problems in testing is faced in all fields. How well these problems are handled, or can be handled in a given field, determines the degree of confidence that can be placed in a measured value of accuracy. Some fields fare much better than others.

Ruth Tal-Singer,  Peter M A Calverley,  Emiel Wouters … (2011)
Current assessment of COPD relies extensively on the use of spirometry, an effort-dependent maneuver. Impulse oscillometry (IOS) is a non-volitional way to measure respiratory system mechanics, but its relationship to structural and functional measurements in large groups of patients with COPD is not clear. We evaluated the ability of IOS to detect and stage COPD severity in the prospective ECLIPSE cohort of COPD patients defined spirometrically, and contrasted with smoking and non-smoking healthy subjects. Additionally, we assessed whether IOS relates to extent of CT-defined emphysema. We measured lung impedance with IOS in healthy non-smokers (n = 233), healthy former smokers (n = 322) or patients with COPD (n = 2054) and related these parameters with spirometry and areas of low attenuation in lung CT. In healthy control subjects, IOS demonstrated good repeatability over 3 months. In the COPD group, respiratory system impedance was worse compared with controls as was frequency dependence of resistance, which related to GOLD stage. However, 29-86% of the COPD subjects had values that fell within the 90% confidence interval of several parameters of the healthy non-smokers. Although mean values for impedance parameters and CT indices worsened as GOLD severity increased, actual correlations between them were poor (r ≤ 0.16). IOS can be reliably used in large cohorts of subjects to assess respiratory system impedance. Cross-sectional data suggest that it may have limited usefulness in evaluating the degree of pathologic disease, whereas its role in assessing disease progression in COPD currently remains undefined. Copyright © 2011. Published by Elsevier Ltd.

Ana Maria G T Di Mango,  Paula Silva,  José Jansen … (2006)
The Forced Oscillation Technique (FOT) is a method for non-invasively assessing respiratory mechanics during spontaneous breathing, demanding little cooperation. The aim of this study was to test the ability of FOT to describe the changes in respiratory mechanics in progressive COPD. The study was performed in a control group formed by 21 healthy subjects and 79 outpatients with COPD, which were classified by spirometry, according to the degree of airway obstruction, in mild, moderate and severe groups. Resistive impedance data were submitted to linear regression analysis over the 4-16 Hz frequency range, which yielded the total respiratory system resistance extrapolated at 0 Hz (R0), the respiratory system conductance (Grs), mean respiratory resistance (Rm), and the resistance/frequency slope (S). Reactance data were interpreted using the mean values (Xm) over the 4-32 Hz frequency range, the dynamic compliance (Crs,dyn), the dynamic elastance (E(rs,dyn)), and the resonant frequency (fr) data. Considering the control and mild groups, the increase of airway obstruction resulted in a significant increase of R0 (P<0.008), Rm (P<0.001), and a significant reduction in Grs (P<0.002). Reactive parameters, Crs, dyn and Ers,dyn also presented significant modifications. The subsequent increase (mild to moderate) showed a significant raise of R(0) (P<0.007), S (P<0.001), and a reduction in Grs (P<0.015), while significant increases in Xrs (P<0.001), and Ers,dyn (P<0.02), and also a reduction in Crs, dyn (P<0.02) were also observed. In contrast to earlier stages, in the late stage of the airway obstruction increase (moderate to severe obstruction), resistive parameters did not present statistically significant modifications, while significant modifications were observed in Xrs (P<0.02), Crs, dyn (P<0.003) and Ers,dyn (P<0.003). The results of this study demonstrated that the FOT is useful for detecting the respiratory mechanics modifications in COPD patients. The initial phases of airway obstruction in COPD can be described mainly by resistive parameters, while in more advanced phases, reactive parameters seem to be more useful. Since the FOT has the advantage of being a simple method, such a technique may give a significant clinical contribution, representing an alternative and/or complement to the evaluation of respiratory mechanics by means of forced expiration.