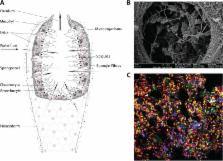 A paradigm shift has recently transformed the field of biological science; molecular advances have revealed how fundamentally important microorganisms are to many aspects of a host’s phenotype and evolution. In the process, an era of “holobiont” research has emerged to investigate the intricate network of interactions between a host and its symbiotic microbial consortia. Marine sponges are early-diverging metazoa known for hosting dense, specific, and often highly diverse microbial communities. Here we synthesize current thoughts about the environmental and evolutionary forces that influence the diversity, specificity, and distribution of microbial symbionts within the sponge holobiont, explore the physiological pathways that contribute to holobiont function, and describe the molecular mechanisms that underpin the establishment and maintenance of these symbiotic partnerships. The collective genomes of the sponge holobiont form the sponge hologenome, and we highlight how the forces that define a sponge’s phenotype in fact act on the genomic interplay between the different components of the holobiont.

C Waters,  Bonnie Bassler (2004)
Bacteria communicate with one another using chemical signal molecules. As in higher organisms, the information supplied by these molecules is critical for synchronizing the activities of large groups of cells. In bacteria, chemical communication involves producing, releasing, detecting, and responding to small hormone-like molecules termed autoinducers . This process, termed quorum sensing, allows bacteria to monitor the environment for other bacteria and to alter behavior on a population-wide scale in response to changes in the number and/or species present in a community. Most quorum-sensing-controlled processes are unproductive when undertaken by an individual bacterium acting alone but become beneficial when carried out simultaneously by a large number of cells. Thus, quorum sensing confuses the distinction between prokaryotes and eukaryotes because it enables bacteria to act as multicellular organisms. This review focuses on the architectures of bacterial chemical communication networks; how chemical information is integrated, processed, and transduced to control gene expression; how intra- and interspecies cell-cell communication is accomplished; and the intriguing possibility of prokaryote-eukaryote cross-communication.

John McCutcheon,  Nancy Moran (2012)
Since 2006, numerous cases of bacterial symbionts with extraordinarily small genomes have been reported. These organisms represent independent lineages from diverse bacterial groups. They have diminutive gene sets that rival some mitochondria and chloroplasts in terms of gene numbers and lack genes that are considered to be essential in other bacteria. These symbionts have numerous features in common, such as extraordinarily fast protein evolution and a high abundance of chaperones. Together, these features point to highly degenerate genomes that retain only the most essential functions, often including a considerable fraction of genes that serve the hosts. These discoveries have implications for the concept of minimal genomes, the origins of cellular organelles, and studies of symbiosis and host-associated microbiota.

The Amphimedon queenslandica genome and the evolution of animal complexity.

Ben J. Woodcroft,  S. Richards,  J Jackson … (2010)
Sponges are an ancient group of animals that diverged from other metazoans over 600 million years ago. Here we present the draft genome sequence of Amphimedon queenslandica, a demosponge from the Great Barrier Reef, and show that it is remarkably similar to other animal genomes in content, structure and organization. Comparative analysis enabled by the sequencing of the sponge genome reveals genomic events linked to the origin and early evolution of animals, including the appearance, expansion and diversification of pan-metazoan transcription factor, signalling pathway and structural genes. This diverse 'toolkit' of genes correlates with critical aspects of all metazoan body plans, and comprises cell cycle control and growth, development, somatic- and germ-cell specification, cell adhesion, innate immunity and allorecognition. Notably, many of the genes associated with the emergence of animals are also implicated in cancer, which arises from defects in basic processes associated with metazoan multicellularity.