Antigenic conservation and immunogenicity of the HIV coreceptor binding site 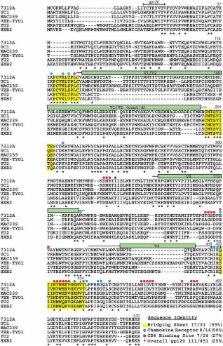 Immunogenic, broadly reactive epitopes of the HIV-1 envelope glycoprotein could serve as important targets of the adaptive humoral immune response in natural infection and, potentially, as components of an acquired immune deficiency syndrome vaccine. However, variability in exposed epitopes and a combination of highly effective envelope-cloaking strategies have made the identification of such epitopes problematic. Here, we show that the chemokine coreceptor binding site of HIV-1 from clade A, B, C, D, F, G, and H and circulating recombinant form (CRF)01, CRF02, and CRF11, elicits high titers of CD4-induced (CD4i) antibody during natural human infection and that these antibodies bind and neutralize viruses as divergent as HIV-2 in the presence of soluble CD4 (sCD4). 178 out of 189 (94%) HIV-1–infected patients had CD4i antibodies that neutralized sCD4-pretreated HIV-2 in titers (50% inhibitory concentration) as high as 1:143,000. CD4i monoclonal antibodies elicited by HIV-1 infection also neutralized HIV-2 pretreated with sCD4, and polyclonal antibodies from HIV-1–infected humans competed specifically with such monoclonal antibodies for binding. In vivo , variants of HIV-1 with spontaneously exposed coreceptor binding surfaces were detected in human plasma; these viruses were neutralized directly by CD4i antibodies. Despite remarkable evolutionary diversity among primate lentiviruses, functional constraints on receptor binding create opportunities for broad humoral immune recognition, which in turn serves to constrain the viral quasispecies.

T. Wyatt,  J Sodroski (1998)
The human immunodeficiency virus-type 1 (HIV-1) envelope glycoproteins interact with receptors on the target cell and mediate virus entry by fusing the viral and cell membranes. The structure of the envelope glycoproteins has evolved to fulfill these functions while evading the neutralizing antibody response. An understanding of the viral strategies for immune evasion should guide attempts to improve the immunogenicity of the HIV-1 envelope glycoproteins and, ultimately, aid in HIV-1 vaccine development.

James Robinson,  Donald van der Peet,  Peter D. Kwong … (2002)
The ability of human immunodeficiency virus (HIV-1) to persist and cause AIDS is dependent on its avoidance of antibody-mediated neutralization. The virus elicits abundant, envelope-directed antibodies that have little neutralization capacity. This lack of neutralization is paradoxical, given the functional conservation and exposure of receptor-binding sites on the gp120 envelope glycoprotein, which are larger than the typical antibody footprint and should therefore be accessible for antibody binding. Because gp120-receptor interactions involve conformational reorganization, we measured the entropies of binding for 20 gp120-reactive antibodies. Here we show that recognition by receptor-binding-site antibodies induces conformational change. Correlation with neutralization potency and analysis of receptor-antibody thermodynamic cycles suggested a receptor-binding-site 'conformational masking' mechanism of neutralization escape. To understand how such an escape mechanism would be compatible with virus-receptor interactions, we tested a soluble dodecameric receptor molecule and found that it neutralized primary HIV-1 isolates with great potency, showing that simultaneous binding of viral envelope glycoproteins by multiple receptors creates sufficient avidity to compensate for such masking. Because this solution is available for cell-surface receptors but not for most antibodies, conformational masking enables HIV-1 to maintain receptor binding and simultaneously to resist neutralization.

The antigenic structure of the HIV gp120 envelope glycoprotein.

T. Wyatt,  E. Anne Desjardins,  Margaret S. Robinson … (1998)
The human immunodeficiency virus HIV-1 establishes persistent infections in humans which lead to acquired immunodeficiency syndrome (AIDS). The HIV-1 envelope glycoproteins, gp120 and gp41, are assembled into a trimeric complex that mediates virus entry into target cells. HIV-1 entry depends on the sequential interaction of the gp120 exterior envelope glycoprotein with the receptors on the cell, CD4 and members of the chemokine receptor family. The gp120 glycoprotein, which can be shed from the envelope complex, elicits both virus-neutralizing and non-neutralizing antibodies during natural infection. Antibodies that lack neutralizing activity are often directed against the gp120 regions that are occluded on the assembled trimer and which are exposed only upon shedding. Neutralizing antibodies, by contrast, must access the functional envelope glycoprotein complex and typically recognize conserved or variable epitopes near the receptor-binding regions. Here we describe the spatial organization of conserved neutralization epitopes on gp120, using epitope maps in conjunction with the X-ray crystal structure of a ternary complex that includes a gp120 core, CD4 and a neutralizing antibody. A large fraction of the predicted accessible surface of gp120 in the trimer is composed of variable, heavily glycosylated core and loop structures that surround the receptor-binding regions. Understanding the structural basis for the ability of HIV-1 to evade the humoral immune response should assist in the design of a vaccine.