Vaccine-preventable disease control in the People’s Republic of China: 1949–2016 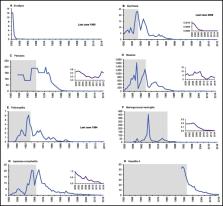 China's immunization program is one of the oldest and largest in the world. Rates of vaccine-preventable diseases (VPD) are comparable to those in high-income countries. The program's evolution has been characterized by ambitious target setting and innovative strategies that have not been widely described.

Widespread immunization began in the 1950s with smallpox, diphtheria, and Bacillus-Calmette Guerin vaccines, and in the 1960s with pertussis, tetanus, polio, measles, and Japanese encephalitis (JE) vaccines. The largest drops in absolute VPD burden occurred in the 1970s with establishment of the Rural Cooperative Medical System and a cadre of trained peasant health workers whose responsibilities included vaccinations. From 1970 to 1979, incidence per 100,000 population dropped 48% from 3.3 to 1.75 for diphtheria, 50% from 152.2 to 49.4 for pertussis, 77% from 2.5 to 0.6 for polio, 60% from 450.5 to 178.3 for measles, and 72% from 18.0 to 5.1 for JE, averting an average of 4 million VPD cases each year. Until the early 1980s, vaccines were delivered through annual winter campaigns using a coordinated ‘ rush-relay’ system to expedite transport while leveraging vaccine thermostability. Establishment of the cold chain system during in the 1980s allowed bi-monthly vaccination rounds and more timely vaccination resulting in rates of diphtheria, pertussis, measles and meningitis falling over 90% from 1980 to 1989, while polio and JE rates fell 40–50%. In the 1990s, progress stalled as financing for public health was weakened by broad market reforms. Large investments in public health and immunizations by the central government since 2004 has led to further declines in VPD burden and increased equity. During 2011–2016, the incidence per 100,000 population was <2.0 for measles and <0.2 for pertussis, JE, meningococcal meningitis, and hepatitis A. From 1992 to 2014, the prevalence of chronic hepatitis B infection in children <5 years fell from 9.7% to 0.3%, a 97% decline. China was certified polio-free in 2000 and diphtheria was last reported in 2006.

Long-term political commitment to immunizations as a basic right, ambitious targets, use of disease incidence as the primary metric to assess program performance, and nationwide scale-up of successful locally developed strategies that optimized use of available limited resources have been critical to China's success in controlling vaccine-preventable diseases.

Xiaofeng Liang,  Shengli Bi,  Weizhong Yang … (2009)
To determine the prevalence of hepatitis B surface antigen (HBsAg), hepatitis B surface antibody (anti-HBs), and hepatitis B core anti-body (anti-HBc) in a representative population in China 14 years after introduction of hepatitis B vaccination of infants. National serosurvey, with participants selected by multi-stage random sampling. Demographics and hepatitis B vaccination history collected by questionnaire and review of vaccination records, and serum tested for HBsAg, antibody to anti-HBc and anti-HBs by ELISA. The weighted prevalences of HBsAg, anti-HBs and anti-HBc for Chinese population aged 1-59 years were 7.2%, 50.1%, 34.1%, respectively. HBsAg prevalence was greatly diminished among those age <15 years compared to that found in the 1992 national serosurvey, and among children age <5 years was only 1.0% (90% reduction). Reduced HBsAg prevalence was strongly associated with vaccination among all age groups. HBsAg risk in adults was associated with male sex, Western region, and certain ethnic groups and occupations while risk in children included birth at home or smaller hospitals, older age, and certain ethnic groups (Zhuang and other). China has already reached the national goal of reducing HBsAg prevalence to less than 1% among children under 5 years and has prevented an estimated 16-20 million HBV carriers through hepatitis B vaccination of infants. Immunization program should be further strengthened to reach those remaining at highest risk.

Prevention of Chronic Hepatitis B after 3 Decades of Escalating Vaccination Policy, China

Fuqiang Cui,  Lipin Shen,  Li Li … (2017)
China’s hepatitis B virus (HBV) prevention policy has been evaluated through nationally representative serologic surveys conducted in 1992 and 2006. We report results of a 2014 serologic survey and reanalysis of the 1992 and 2006 surveys in the context of program policy. The 2014 survey used a 2-stage sample strategy in which townships were selected from 160 longstanding, nationally representative, county-level disease surveillance points, and persons 1–29 years of age were invited to participate. The 2014 sample size was 31,713; the response rate was 83.3%. Compared with the 1992 pre–recombinant vaccine survey, HBV surface antigen prevalence declined 46% by 2006 and by 52% by 2014. Among children <5 years of age, the decline was 97%. China’s HBV prevention program, targeted toward interrupting perinatal transmission, has been highly successful and increasingly effective. However, this progress must be sustained for decades to come, and elimination of HBV transmission will require augmented strategies.

O Ronveaux,  D Rickert,  S. Hadler … (2005)
OBJECTIVE: To evaluate the consistency and quality of immunization monitoring systems in 27 countries during 2002-03 using standardized data quality audits (DQAs) that had been launched within the framework of the Global Alliance for Vaccines and Immunization. METHODS: The consistency of reporting systems was estimated by determining the proportion of third doses of diphtheria-tetanus-pertussis (DTP-3) vaccine reported as being administered that could be verified by written documentation at health facilities and districts. The quality of monitoring systems was measured using quality indices for different components of the monitoring systems. These indices were applied to each level of the health service (health unit, district and national). FINDINGS: The proportion of verified DTP-3 doses was lower than 85% in 16 countries. Difficulties in verifying the doses administered often arose at the peripheral level of the health service, usually as the result of discrepancies in information between health units and their corresponding districts or because completed recording forms were not available from health units. All countries had weaknesses in their monitoring systems; these included the inconsistent use of monitoring charts; inadequate monitoring of vaccine stocks, injection supplies and adverse events; unsafe computer practices; and poor monitoring of completeness and timeliness of reporting. CONCLUSION: Inconsistencies in immunization data occur in many countries, hampering their ability to manage their immunization programmes. Countries should use these findings to strengthen monitoring systems so that data can reliably guide programme activities. The DQA is an innovative tool that provides a way to independently assess the quality of immunization monitoring systems at all levels of a health service and serves as a point of entry to make improvements. It provides a useful example for other global health initiatives.

Contributed equally to this article.