A phylogeny for the pomatiopsidae (Gastropoda: Rissooidea): a resource for taxonomic, parasitological and biodiversity studies 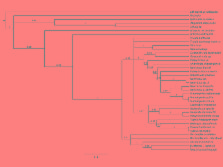 The Pomatiopsidae are reported from northern India into southern China and Southeast Asia, with two sub-families, the Pomatiopsinae (which include freshwater, amphibious, terrestrial and marine species) and the freshwater Triculinae. Both include species acting as intermediate host for species of the blood-fluke Schistosoma which cause a public health problem in East Asia. Also, with around 120 species, triculine biodiversity exceeds that of any other endemic freshwater molluscan fauna. Nevertheless, the origins of the Pomatiopsidae, the factors driving such a diverse radiation and aspects of their co-evolution with Schistosoma are not fully understood. Many taxonomic questions remain; there are problems identifying medically relevant species. The predicted range is mostly unsurveyed and the true biodiversity of the family is underestimated. Consequently, the aim of the study was to collect DNA-sequence data for as many pomatiopsid taxa as possible, as a first step in providing a resource for identification of epidemiologically significant species (by non-malacologists), for use in resolving taxonomic confusion and for testing phylogeographical hypotheses.

The evolutionary radiation of the Triculinae was shown to have been rapid and mostly post late Miocene. Molecular dating indicated that the radiation of these snails was driven first by the uplift of the Himalaya and onset of a monsoon system, and then by late-Pliocene global warming. The status of Erhaia as Anmicolidae is supported. The genera Tricula and Neotricula are shown to be non-monophyletic and the tribe Jullieniini may be polyphyletic (based on convergent characters). Triculinae from northern Vietnam could be derived from Gammatricula of Fujian/Yunnan, China.

The molecular dates and phylogenetic estimates in this study are consistent with an Australasian origin for the Pomatiopsidae and an East to West radiation via Oligocene Borneo-Philippines island hopping to Japan and then China (Triculinae arising mid-Miocene in Southeast China), and less so with a triculine origin in Tibet. The lack of monophyly in the medically important genera and indications of taxonomic inaccuracies, call for further work to identify epidemiologically significant taxa (e.g., Halewisia may be potential hosts for Schistosoma mekongi) and highlight the need for surveys to determine the true biodiversity of the Triculinae.

Clive Phillips,  Alan Cooper,  Alexei J. Drummond … (2005)
Studies of molecular evolutionary rates have yielded a wide range of rate estimates for various genes and taxa. Recent studies based on population-level and pedigree data have produced remarkably high estimates of mutation rate, which strongly contrast with substitution rates inferred in phylogenetic (species-level) studies. Using Bayesian analysis with a relaxed-clock model, we estimated rates for three groups of mitochondrial data: avian protein-coding genes, primate protein-coding genes, and primate d-loop sequences. In all three cases, we found a measurable transition between the high, short-term (< 1-2 Myr) mutation rate and the low, long-term substitution rate. The relationship between the age of the calibration and the rate of change can be described by a vertically translated exponential decay curve, which may be used for correcting molecular date estimates. The phylogenetic substitution rates in mitochondria are approximately 0.5% per million years for avian protein-coding sequences and 1.5% per million years for primate protein-coding and d-loop sequences. Further analyses showed that purifying selection offers the most convincing explanation for the observed relationship between the estimated rate and the depth of the calibration. We rule out the possibility that it is a spurious result arising from sequence errors, and find it unlikely that the apparent decline in rates over time is caused by mutational saturation. Using a rate curve estimated from the d-loop data, several dates for last common ancestors were calculated: modern humans and Neandertals (354 ka; 222-705 ka), Neandertals (108 ka; 70-156 ka), and modern humans (76 ka; 47-110 ka). If the rate curve for a particular taxonomic group can be accurately estimated, it can be a useful tool for correcting divergence date estimates by taking the rate decay into account. Our results show that it is invalid to extrapolate molecular rates of change across different evolutionary timescales, which has important consequences for studies of populations, domestication, conservation genetics, and human evolution.