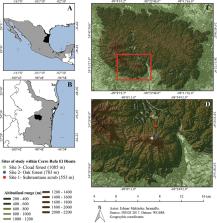 Butterflies are one of the most recognized and useful groups for the monitoring and establishment of important conservation areas and management policies. In the present study, we estimate the richness and diversity, as well as the association value of submontane scrub, oak forest, and cloud forest species at Cerro Bufa El Diente, within the Sierra de San Carlos priority land region, located in the Central-western region of Tamaulipas, Mexico. Three sampling sites were established based on criteria of vegetation distribution per altitudinal floor. One site for each altitudinal floor and vegetation type. Sampling was carried out in permanent transects on a monthly basis at each site, using an aerial entomological net and ten Van Someren-Rydon traps, during four sampling periods: early dry season, late dry season, early wet season and late wet season. In total, 7,611 specimens belonging to six families, 20 subfamilies, 32 tribes, 148 genera and 243 species of the study area were collected. Nymphalidae was the most abundant family with 3,454 specimens, representing 45.38% of total abundance in the study area. Lower abundance was recorded in Hesperiidae (19.17%), Pieridae (16.41%), Lycaenidae (10.17%), Papilionidae (5.12%), and finally Riodinidae (3.74%). The highest species richness was presented in the family Hesperiidae with 34.57% of the total obtained species followed by Nymphalidae (30.45%), Lycaenidae (15.23%), Pieridae (9.88%), Papilionidae (5.76%), and Riodinidae (4.12%). Twenty-seven species were categorized as abundant, these species, Anaea aidea (Guérin-Méneville, 1844), Libytheana carinenta larvata (Strecker, 1878), Pyrgus oileus (Linnaeus, 1767), Mestra amymone (Ménétriés, 1857) and Phoebis agarithe agarithe (Boisduval, 1836) presented the highest number of specimens. Sixty-five species were considered common, constituting 41.73% of the total number of butterflies, 63 frequent (9.76% of the total abundance), 55 limited (2.54%) and 33 rare (0.43%). The greatest number of specimens and species, as well as alpha diversity, were presented on the lowest altitudinal floor, made up of submontane scrub, and decreased significantly with increasing altitude. According to the cluster analysis, low and intermediate altitude sites constitute an area of distribution of species that prefer tropical conditions, while the third-floor site forms an independent group of high mountain species. The greatest abundance and richness of species, as well as alpha diversity, was obtained during the last wet season, decreasing significantly towards the early dry season. Moreover, through the use of the association value, 19 species were designated as indicators, three for the last altitudinal floor, three for the intermediate and 13 for the first. The present work represents the first report of the altitudinal variation in richness, abundance and diversity of butterflies in the northeast of Mexico. These results highlight the importance of the conservation of this heterogeneous habitat and establish reference data for the diurnal Lepidoptera fauna of the region.

On the Relationship between Abundance and Distribution of Species