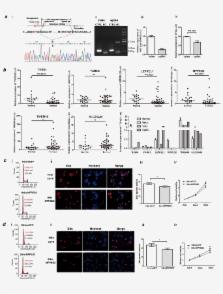 Integration of human papillomavirus (HPV) viral DNA into the human genome has been postulated as an important etiological event during cervical carcinogenesis. Several recent reports suggested a possible role for such integration‐targeted cellular genes (ITGs) in cervical carcinogenesis. Therefore, a comprehensive analysis of HPV integration events was undertaken using data collected from 14 publications, with 499 integration loci on human chromosomes included. It revealed that HPV DNA preferred to integrate into intragenic regions and gene‐dense regions of human chromosomes. Intriguingly, the host cellular genes nearby the integration sites were found to be more transcriptionally active compared with control. Furthermore, analysis of the integration sites in the human genome revealed that there were several integration hotspots although all chromosomes were represented. The ITGs identified were found to be enriched in tumor‐related terms and pathways using gene ontology and KEGG analysis. In line with this, three of six ITGs tested were found aberrantly expressed in cervical cancer tissues. Among them, it was demonstrated for the first time that MPPED2 could induce HeLa cell and SiHa cell G1/S transition block and cell proliferation retardation. Moreover, “knocking out” the integrated HPV fragment in HeLa cell line decreased expression of MYC located ∼500 kb downstream of the integration site, which provided the first experimental evidence supporting the hypothesis that integrated HPV fragment influence MYC expression via long distance chromatin interaction. Overall, the results of this comprehensive analysis implicated that dysregulation of ITGs caused by viral integration as possibly having an etiological involvement in cervical carcinogenesis.

Human papillomavirus (HPV) integration into the host genome is associated with increased severity of cervical precancer, suggesting that it is an influential event in cervical carcinogenesis. However, whether the genomic sites affected by HPV integration are relevant to cervical cancer remains unclear. In this study, analysis of 499 loci showed preferred HPV integration into intragenic and gene‐rich chromosomal sites. Frequently, these sites were located near transcriptionally active regions. In addition, multiple HPV integration “hotspots” were identified, the majority of which contained cancer‐related genes, such as MYC and the potentially novel tumor suppressor MPPED2.

Association of human papillomavirus types 16 and 18 E6 proteins with p53.

A. Levine,  Paul M. Howley,  B Werness (1990)
Human papillomavirus type 16 (HPV-16) is a DNA tumor virus that is associated with human anogenital cancers and encodes two transforming proteins, E6 and E7. The E7 protein has been shown to bind to the retinoblastoma tumor suppressor gene product, pRB. This study shows that the E6 protein of HPV-16 is capable of binding to the cellular p53 protein. The ability of the E6 proteins from different human papillomaviruses to form complexes with p53 was assayed and found to correlate with the in vivo clinical behavior and the in vitro transforming activity of these different papillomaviruses. The wild-type p53 protein has tumor suppressor properties and has also been found in association with large T antigen and the E1B 55-kilodalton protein in cells transformed by SV40 and by adenovirus type 5, respectively, providing further evidence that the human papillomaviruses, the adenoviruses, and SV40 may effect similar cellular pathways in transformation.

Andrew Adey,  Joshua Burton,  Jacob O Kitzman … (2013)
Summary The HeLa cell line was established in 1951 from cervical cancer cells taken from a patient, Henrietta Lacks, marking the first successful attempt to continually culture human-derived cells in vitro 1 . HeLa’s robust growth and unrestricted distribution resulted in its broad adoption – both intentionally and through widespread cross-contamination 2 – and for the past sixty years it has served a role analogous to that of a model organism 3 . Its cumulative impact is illustrated by the fact that HeLa is named in >74,000 or ~0.3% of PubMed abstracts. The genomic architecture of HeLa remains largely unexplored beyond its karyotype 4 , in part because like many cancers, its extensive aneuploidy renders such analyses challenging. We performed haplotype-resolved whole genome sequencing 5 of the HeLa CCL-2 strain, discovering point and indel variation, mapping copy-number and loss of heterozygosity (LOH), and phasing variants across full chromosome arms. We further investigated variation and copy-number profiles for HeLa S3 and eight additional strains. Surprisingly, HeLa is relatively stable with respect to point variation, accumulating few new mutations since early passaging. Haplotype resolution facilitated reconstruction of an amplified, highly rearranged region at chromosome 8q24.21 at which the HPV-18 viral genome integrated as the likely initial event underlying tumorigenesis. We combined these maps with RNA-Seq 6 and ENCODE Project 7 datasets to phase the HeLa epigenome, revealing strong, haplotype-specific activation of the proto-oncogene MYC by the integrated HPV-18 genome ~500 kilobases upstream, and permitting global analyses of the relationship between gene dosage and expression. These data provide an extensively phased, high-quality reference genome for past and future experiments relying on HeLa, and demonstrate the value of haplotype resolution for characterizing cancer genomes and epigenomes.