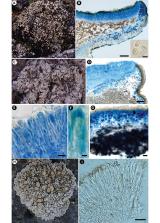 New collections of six Squamarina species from type localities in China were studied. The comparison of morphological characteristics and secondary metabolites with those of the type specimens and phylogenetic analyses suggest that S. callichroa and S. pachyphylla belong to Rhizoplaca , S. semisterilis belongs to Lobothallia and S. chondroderma should be retained in Lecanora temporarily. Only two species, S. kansuensis and S. oleosa , remain in Squamarina . The new combinations Lobothallia semisterilis (H. Magn.) Y. Y. Zhang, Rhizoplaca callichroa (Zahlbr.) Y. Y. Zhang and R. pachyphylla (H. Magn.) Y. Y. Zhang are proposed. Detailed descriptions to aid the identification of these species, distributions and phylogenetic trees, based on multiple collections, are presented. The generic concept of Squamarina is recircumscribed in this study.

Filip Högnabba (2006)
In the present study phylogenetic relationships of the genus Stereocaulon (lichenized ascomycetes) were examined using DNA sequences from the ITS1-5.8 S-ITS2 rDNA gene cluster and from the protein-coding beta-tubulin gene. In addition to the fruticose species traditionally classified in Stereocaulon, representatives of the crustose species that have recently been transferred to the genus were included. Muhria, a monotypic genus that is morphologically similar to Stereocaulon, differing only in apothecia ontogeny, was also incorporated. The analyses included 101 specimens from the ingroup representing 49 taxa. Sequences from both DNA regions were analysed simultaneously using direct optimization under the parsimony optimality criterion. The results support the inclusion of the crustose species and Muhria in Stereocaulon, while the current infrageneric classification is not supported. As Muhria is securely nested within Stereocaulon the new combination Stereocaulon urceolatum comb. nov. (syn. Muhria urceolata) is made. Further, species concepts need to be re-examined, as some species do not appear as monophyletic entities in the phylogeny.