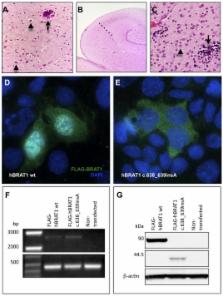 The Clinic for Special Children (CSC) has integrated biochemical and molecular methods into a rural pediatric practice serving Old Order Amish and Mennonite (Plain) children. Among the Plain people, we have used single nucleotide polymorphism (SNP) microarrays to genetically map recessive disorders to large autozygous haplotype blocks (mean = 4.4 Mb) that contain many genes (mean = 79). For some, uninformative mapping or large gene lists preclude disease-gene identification by Sanger sequencing. Seven such conditions were selected for exome sequencing at the Broad Institute; all had been previously mapped at the CSC using low density SNP microarrays coupled with autozygosity and linkage analyses. Using between 1 and 5 patient samples per disorder, we identified sequence variants in the known disease-causing genes SLC6A3 and FLVCR1, and present evidence to strongly support the pathogenicity of variants identified in TUBGCP6, BRAT1, SNIP1, CRADD, and HARS. Our results reveal the power of coupling new genotyping technologies to population-specific genetic knowledge and robust clinical data.

Andrew Kernytsky,  Mark A DePristo,  Ron Do … (2010)
We sequenced all protein-coding regions of the genome (the "exome") in two family members with combined hypolipidemia, marked by extremely low plasma levels of low-density lipoprotein (LDL) cholesterol, high-density lipoprotein (HDL) cholesterol, and triglycerides. These two participants were compound heterozygotes for two distinct nonsense mutations in ANGPTL3 (encoding the angiopoietin-like 3 protein). ANGPTL3 has been reported to inhibit lipoprotein lipase and endothelial lipase, thereby increasing plasma triglyceride and HDL cholesterol levels in rodents. Our finding of ANGPTL3 mutations highlights a role for the gene in LDL cholesterol metabolism in humans and shows the usefulness of exome sequencing for identification of novel genetic causes of inherited disorders. (Funded by the National Human Genome Research Institute and others.).

S.-H. Duan,  V M Dixit (1997)
The effector arm of the cell-death pathway is composed of cysteine proteases belonging to the ICE/CED-3 family. In metazoan cells these exist as inactive polypeptide precursors (zymogens), each composed of a prodomain, which is cleaved to activate the protease, and a large and small catalytic subunit. The coupling of these 'death' proteases to signalling pathways is probably mediated by adaptor molecules that contain protein-protein interaction motifs such as the death domain. Here we describe such an adaptor molecule, RAIDD, which has an unusual bipartite architecture comprising a carboxy-terminal death domain that binds to the homologous domain in RIP, a serine/threonine kinase component of the death pathway. The amino-terminal domain is surprisingly homologous with the sequence of the prodomain of two ICE/CED-3 family members, human ICH-1 (ref. 5) and Caenorhabditis elegans CED-3 (ref. 6). This similar region mediates the binding of RAIDD to ICH-1 and CED-3, serving as a direct link to the death proteases, indicating that the prodomain may, through homophilic interactions, determine the specificity of binding of ICE/CED-3 zymogens to regulatory adaptor molecules. Finally, alternations in the sequence of the N-terminal domain that are equivalent to inactivating mutations in the C. elegans ced-3 gene prevent homophilic binding, highlighting the potentially primordial nature of this interaction.

Publisher ID: PONE-D-11-18526
DOI: 10.1371/journal.pone.0028936
PMC ID: 3260153
PubMed ID: 22279524
Copyright statement: Puffenberger et al. This is an open-access article distributed under the terms of the Creative Commons Attribution License, which permits unrestricted use, distribution, and reproduction in any medium, provided the original author and source are credited.