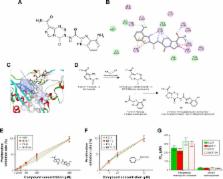 We designed and synthesized a novel nitrogenous heterocyclic compound, 3-(4-amino-1H-benzo[d]imidazole-2-carboxamido)-4-oxo-3,4-dihydroimidazo[5,1-d][1,2,3,5] tetrazine-8-carboxamide, based on alkylglycerone phosphate synthase (AGPS) using computer-aided drug design (CADD), and we measured its effect on the proliferation, invasion, cell cycle and apoptosis of U251 glioma and MCF-7 breast cancer cells. In addition, the compound’s effect on the expression of tumor-related mRNA, circular RNAs (circRNAs) and long non-coding RNAs (lncRNAs) was explored.

It was found that the nitrogenous heterocyclic compound could induce cell cycle arrest at the G2/M phase of U251/MCF-7 cells and activate apoptosis. Real-time PCR showed that the expression levels of tumor-related mRNA, circRNAs and lncRNAs were impacted.

We concluded that the nitrogenous heterocyclic compound inhibits the proliferation and invasion of U251 glioma and MCF-7 breast cancer cells through the induction of apoptosis and cell cycle arrest by regulating tumor-related genes.

Ping Yang,  Zhijun Qiu,  Yuan Jiang … (2016)
CircRNA is a novel type of RNA molecule formed by a covalently closed loop which have no 5′-3′ polarity and possess no polyA tail and relatively stable due to the cyclic structure. Therefore, they may serve as potential targets and diagnosis biomarkers for tumor therapy. cZNF292 is an important circular oncogenic RNA and plays a critical role in the progression of tube formation. This study is aimed at exploring the role of cZNF292 in human glioma tube formation and its potential mechanism of action. We found that cZNF292 silencing suppresses tube formation by inhibiting glioma cell proliferation and cell cycle progression. Cell cycle progression in human glioma U87MG and U251 cells was halted at S/G2/M phase via the Wnt/β-catenin signaling pathway and related genes such as PRR11, Cyclin A, p-CDK2, VEGFR-1/2, p-VEGFR-1/2 and EGFR. The results suggest that cZNF292 silencing plays an important role in the tube formation process and has potential for application as a therapeutic target and biomarker in glioma.

Weizi Hu,  Chunli Tan,  Yunjie He … (2018)
Owing to improved early surveillance and advanced therapy strategies, the current death rate due to breast cancer has decreased; nevertheless, drug resistance and relapse remain obstacles on the path to successful systematic treatment. Multiple mechanisms responsible for drug resistance have been elucidated, and miRNAs seem to play a major part in almost every aspect of cancer progression, including tumorigenesis, metastasis, and drug resistance. In recent years, exosomes have emerged as novel modes of intercellular signaling vehicles, initiating cell–cell communication through their fusion with target cell membranes, delivering functional molecules including miRNAs and proteins. This review particularly focuses on enumerating functional miRNAs involved in breast cancer drug resistance as well as their targets and related mechanisms. Subsequently, we discuss the prospects and challenges of miRNA function in drug resistance and highlight valuable approaches for the investigation of the role of exosomal miRNAs in breast cancer progression and drug resistance.