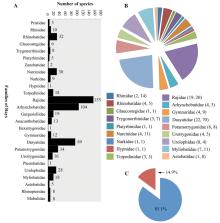 Rays of the World

Peter Last,  William White,  Marcelo de Carvalho … (2016)
Rays are among the largest fishes and evolved from shark-like ancestors nearly 200 million years ago. They share with sharks many life history traits: all species are carnivores or scavengers; all reproduce by internal fertilisation; and all have similar morphological and anatomical characteristics, such as skeletons built of cartilage. Rays of the World is the first complete pictorial atlas of the world’s ray fauna and includes information on many species only recently discovered by scientists while undertaking research for the book. It includes all 26 families and 633 valid named species of rays, but additional undescribed species exist for many groups. Rays of the World features a unique collection of paintings of all living species by Australian natural history artist Lindsay Marshall, compiled as part of a multinational research initiative, the Chondrichthyan Tree of Life Project. Images sourced from around the planet were used by the artist to illustrate the fauna. This comprehensive overview of the world’s ray fauna summarises information such as general identifying features and distributional information about these iconic, but surprisingly poorly known, fishes. It will enable readers to gain a better understanding of the rich diversity of rays and promote wider public interest in the group. Rays of the World is an ideal reference for a wide range of readers, including conservationists, fishery managers, scientists, fishers, divers, students and book collectors.

A revised classification of the family Dasyatidae (Chondrichthyes: Myliobatiformes) based on new morphological and molecular insights.

Peter R Last,  Gavin J P Naylor,  B. Mabel Manjaji-Matsumoto (2016)
The higher-level taxonomy of the stingrays (Dasyatidae) has never been comprehensively reviewed. Recent phylogenetic studies, supported by morphological data, have provided evidence that the group is monophyletic and consists of four major subgroups, the subfamilies Dasyatinae, Neotrygoninae, Urogymninae and Hypolophinae. A morphologically based review of 89 currently recognised species, undertaken for a guide to the world's rays, indicated that most of the currently recognised dasyatid genera are not monophyletic groups. These findings were supported by molecular analyses using the NADH2 gene for about 77 of these species, and this topology is supported by preliminary analyses base on whole mitochondrial genome comparisons. These molecular analyses, based on data generated from the Chondrichthyan Tree of Life project, are the most taxon-rich data available for this family. Material from all of the presently recognised genera (Dasyatis, Pteroplatytrygon and Taeniurops [Dasyatinae]; Neotrygon and Taeniura [Neotrygoninae]; Himantura and Urogymnus [Urogymninae]; and Makararaja and Pastinachus [Hypolophinae]), are included and their validity largely supported. Urogymnus and the two most species rich genera, Dasyatis and Himantura, are not considered to be monophyletic and were redefined based on external morphology. Seven new genus-level taxa are erected (Megatrygon and Telatrygon [Dasyatinae]; Brevitrygon, Fluvitrygon, Fontitrygon, Maculabatis and Pateobatis [Urogymninae], and an additional three (Bathytoshia, Hemitrygon and Hypanus [Dasyatinae]) are resurrected from the synonymy of Dasyatis. The monotypic genus Megatrygon clustered with 'amphi-American Himantura' outside the Dasyatidae, and instead as the sister group of the Potamotrygonidae and Urotrygonidae. Megatrygon is provisionally retained in the Dasyatinae pending further investigation of its internal anatomy. The morphologically divergent groups, Bathytoshia and Pteroplatytrygon, possibly form a single monophyletic group so further investigation is needed to confirm the validity of Pteroplatytrygon. A reclassification of the family Dasyatidae is provided and the above taxa are defined based on new morphological data.