From red to green: the propidium iodide-permeable membrane of Shewanella decolorationis S12 is repairable 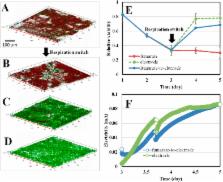 Viability is a common issue of concern in almost all microbial processes. Fluorescence-based assays are extensively used in microbial viability assessment, especially for mixed-species samples or biofilms. Propidium iodide (PI) is the most frequently used fluorescence indicator for cell viability based on the membrane permeability. Our results showed that the accumulation of succinate from fumarate respiration could induce PI-permeability in Shewanella decolorationis biofilm cells. Confocal laser scanning microscope further showed that the PI-permeable membrane could be repaired in situ when the extracellular succinate was eliminated by switching fumarate respiration to electrode respiration. Simultaneously with the membrane repair, the electrode respiring capacity of the originally PI-permeable cells was recovered. Agar-colony counts suggested that a major portion of the repaired cells were viable but nonculturable (VBNC). The results evidenced that S. decolorationis S12 has the capacity to repair PI-permeable membranes which suggests a reevaluation of the fate and function of the PI-permeable bacteria and expanded our knowledge on the flexibility of bacterial survival status in harsh environments.

Bacterial biofilms: from the natural environment to infectious diseases.

Luanne Hall-Stoodley,  Paul Stoodley,  J Costerton (2004)
Biofilms--matrix-enclosed microbial accretions that adhere to biological or non-biological surfaces--represent a significant and incompletely understood mode of growth for bacteria. Biofilm formation appears early in the fossil record (approximately 3.25 billion years ago) and is common throughout a diverse range of organisms in both the Archaea and Bacteria lineages, including the 'living fossils' in the most deeply dividing branches of the phylogenetic tree. It is evident that biofilm formation is an ancient and integral component of the prokaryotic life cycle, and is a key factor for survival in diverse environments. Recent advances show that biofilms are structurally complex, dynamic systems with attributes of both primordial multicellular organisms and multifaceted ecosystems. Biofilm formation represents a protected mode of growth that allows cells to survive in hostile environments and also disperse to colonize new niches. The implications of these survival and propagative mechanisms in the context of both the natural environment and infectious diseases are discussed in this review.

Kelly Nevin,  Byoung-Chan Kim,  Richard Glaven … (2009)
The mechanisms by which Geobacter sulfurreducens transfers electrons through relatively thick (>50 µm) biofilms to electrodes acting as a sole electron acceptor were investigated. Biofilms of Geobacter sulfurreducens were grown either in flow-through systems with graphite anodes as the electron acceptor or on the same graphite surface, but with fumarate as the sole electron acceptor. Fumarate-grown biofilms were not immediately capable of significant current production, suggesting substantial physiological differences from current-producing biofilms. Microarray analysis revealed 13 genes in current-harvesting biofilms that had significantly higher transcript levels. The greatest increases were for pilA, the gene immediately downstream of pilA, and the genes for two outer c-type membrane cytochromes, OmcB and OmcZ. Down-regulated genes included the genes for the outer-membrane c-type cytochromes, OmcS and OmcT. Results of quantitative RT-PCR of gene transcript levels during biofilm growth were consistent with microarray results. OmcZ and the outer-surface c-type cytochrome, OmcE, were more abundant and OmcS was less abundant in current-harvesting cells. Strains in which pilA, the gene immediately downstream from pilA, omcB, omcS, omcE, or omcZ was deleted demonstrated that only deletion of pilA or omcZ severely inhibited current production and biofilm formation in current-harvesting mode. In contrast, these gene deletions had no impact on biofilm formation on graphite surfaces when fumarate served as the electron acceptor. These results suggest that biofilms grown harvesting current are specifically poised for electron transfer to electrodes and that, in addition to pili, OmcZ is a key component in electron transfer through differentiated G. sulfurreducens biofilms to electrodes.