The recurrent campylobacteriosis epidemic over Christmas and New Year in European countries, 2006–2014 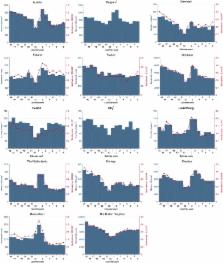 Campylobacteriosis is the most frequently reported foodborne disease in Europe with a notification rate of 71 per 100,000 population in the European Union in 2014. Surveillance data show a clear seasonality whereby case numbers peak during summer months in entire Europe and at the turn of the year, especially in Germany and Switzerland. A detailed description of European surveillance data by country at the turn of the year was missing so far. The objectives of the presented work were to describe national surveillance data of The European Surveillance System for 14 countries during winter times and to generate hypotheses for the observed seasonality of campylobacteriosis cases.

The analysis included 317,986 cases notified between calendar weeks 45 and 8 of winter seasons 2006/2007–2013/2014. Winter peaks in weekly case notifications and notification rates were observed for Austria, Belgium, Finland, Germany, Luxembourg, The Netherlands, Switzerland and Sweden while for Denmark, France, Ireland, Italy, Norway and the United Kingdom no unusual increase was observed. Generally, weekly notification rates peaked in calendar week 1 or 2 after a strong decline in the last week of December and reached values of a multiple of the observed notification rates in the weeks before or after the peak e.g. up to 6.5 notifications per 100,000 population per week in Luxembourg. Disease onset of cases notified during winter peaks occurred predominantly in calendar weeks 52 and 1 and point towards risk exposures around Christmas and New Year. The consumption of meat fondue or table top grilling poses such a risk and is popular in many countries with an observed winter peak. Additionally, increased travel activities over the festive season could foster campylobacteriosis transmission. Surveillance artefacts (e.g. reporting delays due to public holidays) should be excluded as causes for country-specific winter peaks before investigating risk exposures.

The European Union summary report on trends and sources of zoonoses, zoonotic agents and food-borne outbreaks in 2013

Campylobacter epidemiology: a descriptive study reviewing 1 million cases in England and Wales between 1989 and 2011

A tradition and an epidemic: determinants of the campylobacteriosis winter peak in Switzerland

Philipp Bless,  Claudia Schmutz,  Kathrin Pipczynski-Suter … (2014)
Campylobacteriosis is the most frequently reported food borne infection in Switzerland. We investigated determinants of infections and illness experience in wintertime. A case–control study was conducted in Switzerland between December 2012 and February 2013. Cases were recruited among laboratory-confirmed campylobacteriosis patients. Population-based controls were matched according to age group, sex and canton of residence. We determined risk factors associated with campylobacteriosis, and help seeking behaviour and illness perception. The multivariable analysis identified two factors associated with an increased risk for campylobacteriosis: consumption of meat fondue (matched odds ratio [mOR] 4.0, 95 % confidence interval [CI] 2.3–7.1) and travelling abroad (mOR 2.7, 95 % CI 1.1–6.4). Univariable analysis among meat fondue consumers revealed chicken as the type of meat with the highest risk of disease (mOR 3.8, 95 % CI 1.1–13.5). Most frequently reported signs and symptoms among patients were diarrhoea (98 %), abdominal pain (81 %), fever (66 %), nausea (44 %) and vomiting (34 %). The median perceived disease severity was 8 on a 1-to-10 rating scale. Patients reported a median duration of illness of 7 days and 14 % were hospitalised. Meat fondues, mostly “Fondue chinoise”, traditionally consumed during the festive season in Switzerland, are the major driver of the epidemic campylobacteriosis peak in wintertime. At these meals, individual handling and consumption of chicken meat may play an important role in disease transmission. Laboratory-confirmed patients are severely ill and hospitalisation rate is considerable. Public health measures such as decontamination of chicken meat and improved food handling behaviour at the individual level are urgently needed.