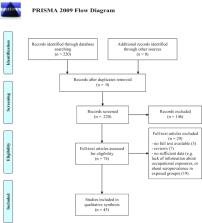 Emerging viral infections represent a public health risk pointed out by the spreading of pathogens with potential zoonotic risk. Moreover, the risk of zoonosis has probably been underestimated in occupational settings. A literature review between 2007 and 2018 was performed to identify evidences concerning the epidemiological associations between some emerging viruses and occupational diseases. Observational studies and case-reports were selected and analyzed. West Nile Virus (WNV) disease, Crimean-Congo Hemorrhagic Fever (CCHF) disease and Hepatitis E virus (HEV) infection were included in the review for their potential zoonotic transmission. The most important risk factor for acquiring WNV infection and CCHF infection is the exposure to infected mosquitoes and ticks, respectively; therefore, outdoor workers are at risk of infection. HEV is responsible for epidemics and endemics of acute hepatitis in humans, that can become infected through waterborne, foodborne and zoonotic transmission routes. A total of 10, 34 and 45 eligible studies for WNV, CCHF virus (CCFHV) and HEV, respectively, were analyzed by year, country, study design, risk group and outcomes. The occupational risk groups mainly included farm and agricultural workers, veterinarians, slaughterers, animal handlers, healthcare workers and soldiers. These findings support the need to develop effective interventions to prevent transmission of emerging viruses.

Anabel Negredo,  Fernando Calle-Prieto,  Eduardo Palencia-Herrejón … (2017)
Crimean-Congo hemorrhagic fever (CCHF) is a widely distributed, viral, tickborne disease. In Europe, cases have been reported only in the southeastern part of the continent. We report two autochthonous cases in Spain. The index patient acquired the disease through a tick bite in the province of Ávila - 300 km away from the province of Cáceres, where viral RNA from ticks was amplified in 2010. The second patient was a nurse who became infected while caring for the index patient. Both were infected with the African 3 lineage of this virus. (Funded by Red de Investigación Cooperativa en Enfermedades Tropicales [RICET] and Efficient Response to Highly Dangerous and Emerging Pathogens at EU [European Union] Level [EMERGE].).

These authors equally contributed to the paper.

This article is published and distributed under the terms of the Oxford University Press, Standard Journals Publication Model ( https://academic.oup.com/journals/pages/open_access/funder_policies/chorus/standard_publication_model)