Skeletal muscle contraction. The thorough definition of the contractile event requires both load acceleration and load mass to be known 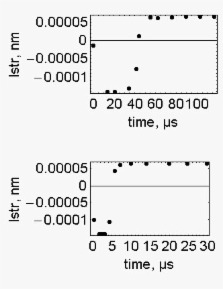 The scope of this work is to show that the correct and complete definition of the system of muscle contraction requires the knowledge of both the mass and the acceleration of the load.

The aim is achieved by making use of a model of muscle contraction that operates into two phases. The first phase considers the effects of the power stroke in the absence of any hindrance. In the second phase viscous hindrance is introduced to match the experimental speed and yield of the contraction. It is shown that, at constant force of the load, changing load acceleration changes the time course of the pre-steady state of myofibril contraction. The decrease of the acceleration of the load from 9.8 m.s -2 to 1 m.s -2 increases the time length of the pre-steady state of the contraction from a few microseconds to many hundreds of microseconds and decreases the stiffness of the active fibre.

We urge that in the study of muscle contraction both the mass and the acceleration of the load are specified.

Preparation of myosin and its subfragments from rabbit skeletal muscle.

Probing the limits to muscle-powered accelerations: lessons from jumping bullfrogs.

J. Roberts,  Thomas L. Marsh (2003)
The function of many muscles during natural movements is to accelerate a mass. We used a simple model containing the essential elements of this functional system to investigate which musculoskeletal features are important for increasing the mechanical work done in a muscle-powered acceleration. The muscle model consisted of a muscle-like actuator with frog hindlimb muscle properties, operating across a lever to accelerate a load. We tested this model in configurations with and without a series elastic element and with and without a variable mechanical advantage. When total muscle shortening was held constant at 30%, the model produced the most work when the muscle operated with a series elastic element and an effective mechanical advantage that increased throughout the contraction (31 J kg(-1) muscle vs 26.6 J kg(-1) muscle for the non-compliant, constant mechanical advantage configuration). We also compared the model output with the dynamics of jumping bullfrogs, measured by high-speed video analysis, and the length changes of the plantaris muscle, measured by sonomicrometry. This comparison revealed that the length, force and power trajectory of the body of jumping frogs could be accurately replicated by a model of a fully active muscle operating against an inertial load, but only if the model muscle included a series elastic element. Sonomicrometer measurements of the plantaris muscle revealed an unusual, biphasic pattern of shortening, with high muscle velocities early and late in the contraction, separated by a period of slow contraction. The model muscle produced this pattern of shortening only when an elastic element was included. These results demonstrate that an elastic element can increase the work output in a muscle-powered acceleration. Elastic elements uncouple muscle fiber shortening velocity from body movement to allow the muscle fibers to operate at slower shortening velocities and higher force outputs. A variable muscle mechanical advantage improves the effectiveness of elastic energy storage and recovery by providing an inertial catch mechanism. These results can explain the high power outputs observed in jumping frogs. More generally, our model suggests how the function of non-muscular elements of the musculoskeletal system enhances performance in muscle-powered accelerations.

T Duke (1999)
A quantitative stochastic model of the mechanochemical cycle of myosin, the protein that drives muscle contraction, is proposed. It is based on three premises: (i) the myosin head incorporates a lever arm, whose equilibrium position adjusts as each of the products of ATP hydrolysis dissociates from the nucleotide pocket; (ii) the chemical reaction rates are modified according to the work done in moving the arm; and (iii) the compliance of myosin's elastic element is designed to permit many molecules to work together efficiently. The model has a minimal number of parameters and provides an explanation, at the molecular level, of many of the mechanical and thermodynamic properties of steadily shortening muscle. In particular, the inflexion in the force-velocity curve at a force approaching the isometric load is reproduced. Moreover, the model indicates that when large numbers of myosin molecules act collectively, their chemical cycles can be synchronized, and that this leads to stepwise motion of the thin filament. The oscillatory transient response of muscle to abrupt changes of load is interpreted in this light.