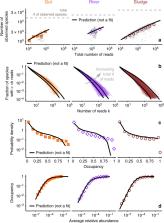 How the coexistence of many species is maintained is a fundamental and unresolved question in ecology. Coexistence is a puzzle because we lack a mechanistic understanding of the variation in species presence and abundance. Whether variation in ecological communities is driven by deterministic or random processes is one of the most controversial issues in ecology. Here, I study the variation of species presence and abundance in microbial communities from a macroecological standpoint. I identify three macroecological laws that quantitatively characterize the fluctuation of species abundance across communities and over time. Using these three laws, one can predict species’ presence and absence, diversity, and commonly studied macroecological patterns. I show that a mathematical model based on environmental stochasticity, the stochastic logistic model, quantitatively predicts the three macroecological laws, as well as non-stationary properties of community dynamics.

Microbes interact in different ways than macro-organisms, but their interactions can still form the basis for broader macroecological patterns like the Species Abundance Distribution. Here, the author shows that thre general ecological patterns can be found in microbes, within and across biome types.

The Canonical Distribution of Commonness and Rarity: Part I