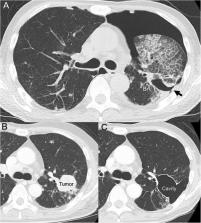 Secondary pneumothorax after chemotherapy for a malignant pulmonary tumor is a complication from a large cavity causing refractory pneumothorax.

A 61-year-old man was referred due to prolonged air leakage from a pulmonary cavity that developed after treatment for pulmonary metastases from renal cell carcinoma. As air leakage continued after thoracic drainage and endobronchial occlusion, we planned thoracoscopy-assisted surgery. Intraoperatively, a large cavity opening to the pulmonary cavity was found in the left upper lobe. As it was difficult to repair the fistula using staplers or direct sutures because the pleura around the cavity was thick and hard, we attempted to plombage the cavity with a pericardial fat pad. After the operation, air leakage immediately disappeared and no recurrence of the pneumothorax was found.

This novel method can be useful to seal a large bronchopleural fistula that causes refractory pneumothorax.

Spontaneous pneumothorax in malignancy: a case report and review of the literature.

Use of a pericardial fat pad flap for preventing bronchopleural fistula: an experimental study focusing on the angiogenesis and cytokine production of the fat pad.