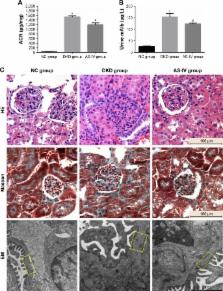 Mesangial cell (MC) activation plays an important role in many glomerular diseases associated with renal fibrosis, including diabetic kidney disease (DKD). The aim of this study was to determine whether Astragaloside IV (AS-IV) modulated MC activation in DKD via autophagy by specifically regulating the autophagy inducer sirtuin 1 (SIRT1).

Cultured MCs and diabetic KK-Ay mice were treated with AS-IV, and the markers and regulatory mediators of autophagy were analyzed using Western blotting, real-time PCR, ELISA and IF.

Deacetylation of FoxO by Sirt1 Plays an Essential Role in Mediating Starvation-Induced Autophagy in Cardiac Myocytes.

Jun Nakae,  Y Maejima,  Julie J. Paik … (2010)
autophagy, a bulk degradation process of cytosolic proteins and organelles, is protective during nutrient starvation in cardiomyocytes (CMs). However, the underlying signaling mechanism mediating autophagy is not well understood. we investigated the role of FoxOs and its posttranslational modification in mediating starvation-induced autophagy. glucose deprivation (GD) increased autophagic flux in cultured CMs, as evidenced by increased mRFP-GFP-LC3 puncta and decreases in p62, which was accompanied by upregulation of Sirt1 and FoxO1. Overexpression of either Sirt1 or FoxO1 was sufficient for inducing autophagic flux, whereas both Sirt1 and FoxO1 were required for GD-induced autophagy. GD increased deacetylation of FoxO1, and Sirt1 was required for GD-induced deacetylation of FoxO1. Overexpression of FoxO1(3A/LXXAA), which cannot interact with Sirt1, or p300, a histone acetylase, increased acetylation of FoxO1 and inhibited GD-induced autophagy. FoxO1 increased expression of Rab7, a small GTP-binding protein that mediates late autophagosome-lysosome fusion, which was both necessary and sufficient for mediating FoxO1-induced increases in autophagic flux. Although cardiac function was maintained in control mice after 48 hours of food starvation, it was significantly deteriorated in mice with cardiac-specific overexpression of FoxO1(3A/LXXAA), those with cardiac-specific homozygous deletion of FoxO1 (c-FoxO1(-/-)), and beclin1(+/-) mice, in which autophagy is significantly inhibited. these results suggest that Sirt1-mediated deacetylation of FoxO1 and upregulation of Rab7 play an important role in mediating starvation-induced increases in autophagic flux, which in turn plays an essential role in maintaining left ventricular function during starvation.

SIRT1 mediates central circadian control in the SCN by a mechanism that decays with aging.

Hung Chang,  Leonard Guarente (2013)
SIRT1 is a NAD(+)-dependent protein deacetylase that governs many physiological pathways, including circadian rhythm in peripheral tissues. Here, we show that SIRT1 in the brain governs central circadian control by activating the transcription of the two major circadian regulators, BMAL1 and CLOCK. This activation comprises an amplifying circadian loop involving SIRT1, PGC-1α, and Nampt. In aged wild-type mice, SIRT1 levels in the suprachiasmatic nucleus are decreased, as are those of BMAL1 and PER2, giving rise to a longer intrinsic period, a more disrupted activity pattern, and an inability to adapt to changes in the light entrainment schedule. Young mice lacking brain SIRT1 phenocopy these aging-dependent circadian changes, whereas mice that overexpress SIRT1 in the brain are protected from the effects of aging. Our findings indicate that SIRT1 activates the central pacemaker to maintain robust circadian control in young animals, and a decay in this activity may play an important role in aging. Copyright © 2013 Elsevier Inc. All rights reserved.

The pathogenesis of diabetic nephropathy.

George L. Bakris,  Suma Dronavalli,  Irena Duka (2008)
Between 20% and 40% of patients with diabetes ultimately develop diabetic nephropathy, which in the US is the most common cause of end-stage renal disease requiring dialysis. Diabetic nephropathy has several distinct phases of development and multiple mechanisms contribute to the development of the disease and its outcomes. This Review provides a summary of the latest published data dealing with these mechanisms; it focuses not only on candidate genes associated with susceptibility to diabetic nephropathy but also on alterations in various cytokines and their interaction with products of advanced glycation and oxidant stress. Additionally, the interactions between fibrotic and hemodynamic cytokines, such as transforming growth factor beta1 and angiotensin II, respectively, are discussed in the context of new information concerning nephropathy development. We touch on the expanding clinical data regarding markers of nephropathy, such as microalbuminuria, and put them into context; microalbuminuria reflects cardiovascular and not renal risk. If albuminuria levels continue to increase over time then nephropathy is present. Lastly, we look at advances being made to enable identification of genetically predisposed individuals.