Use of Common Inflammatory Markers in the Long-Term Screening of Total Hip Arthroprosthesis Infections: Our Experience 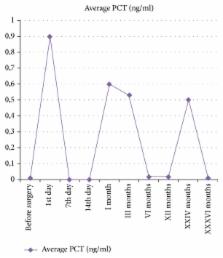 Orthopedic implants have become essential components of modern medicine. The risk of infection of total hip arthroplasty (THA) is 1.5%−2%. Are the C-reactive protein (CRP), the erythrocyte sedimentation rate (ESR), and procalcitonin (PCT) good markers for THA infection screenings? From February 2009 to December 2012 at our Department of Orthopedics and Traumatology, 1248 patients were treated with THA. No prosthesis was cemented. All patients received antibiotic prophylaxis. All patients were discharged approximately 7.4 days after surgery with this clinical and radiographic follow-up program at 15 days and 1, 3, 6, 12, 24, and 36 months after surgery. Blood samples to determine ESR, CRP, and PCT values were taken at 1 hour before surgery and 15 days and 1, 3, 6, 12, 24, and 36 months after surgery. During follow-ups there were 22 cases of THA infections; according the Widmer classification, infections are hematogenous ones in 16 cases, late chronic ones in 5 cases, and early postoperative ones in 1 case. In all cases the three markers were considered positive; in 6 cases there were no radiological signs of septic loosening. ESR, CRP, and PCT proved to have a greater diagnostic accuracy than X-rays in predicting late chronic and early postoperative infections. These markers are valuable support for the surgeon in monitoring the prosthetic implant lifespan.

New developments in diagnosis and treatment of infection in orthopedic implants.

A Widmer (2001)
Orthopedic implants have revolutionized treatment of bone fractures and noninfectious joint arthritis. Today, the risk for orthopedic device-related infection (ODRI) is <1%-2%. However, the absolute number of patients with infection continuously increases as the number of patients requiring such implants grows. Treatment of ODRIs most frequently includes long-term antimicrobial treatment and removal of the implant. Recent evidence from observational trials and 1 randomized clinical trial indicate that a subset of patients can be successfully treated with retention of the implant. Patients eligible for such a treatment must meet the following criteria: acute infection defined as signs and symptoms lasting <14-28 days, an unambiguous diagnosis based on histopathology and microbiology, a stable implant, and susceptibility of the microorganism to an effective orally available antimicrobial agent.

How Reliable Is the Alpha-defensin Immunoassay Test for Diagnosing Periprosthetic Joint Infection? A Prospective Study

Tommaso Bonanzinga,  Akos Zahar,  Michael Dütsch … (2016)
Background A key issue in the treatment of periprosthetic joint infection (PJI) is the correct diagnosis. The main problem is lack of diagnostic tools able to diagnose a PJI with high accuracy. Alpha-defensin has been proposed as a possible solution, but in the current literature, there is a lack of independent validation. Questions/purposes We performed a prospective study to determine (1) what is the sensitivity, specificity, and positive and the negative predictive values of the alpha-defensin immunoassay test in diagnosing PJI; and (2) which clinical features may be responsible for false-positive and false-negative results? Methods Preoperative aspiration was performed in all patients presenting with a painful hip/knee arthroplasty, including both primary and revision implants. Metallosis, other inflammatory comorbidities, and previous/concomitant antibiotic therapy were not considered as exclusion criteria. An inadequate amount of synovial fluid for culture was an exclusion criterion. A total of 156 patients (65 knees, 91 hips) were included in this prospective study. At the time of revision, synovial fluid samples were taken to perform the alpha-defensin assay. During surgical débridement of tissue, samples for cultures and histologic evaluation were taken, and samples were cultured until positive or until negative at 14 days. A diagnosis of PJI was confirmed in 29 patients according to the International Consensus Group on PJI. Results The sensitivity of the alpha-defensin immunoassay was 97% (95% confidence interval [CI], 92%–99%), the specificity was 97% (95% CI, 92%–99%), the positive predictive value was 88% (95% CI, 81%–92%), and the negative predictive value was 99% (95% CI, 96%–99%). Among four false-positive patients, two had metallosis and one had polyethylene wear. The false-negative case presented with a draining sinus, and intraoperative cultures were also negative. Conclusions Alpha-defensin assay appears to be a reliable test, but followup evaluation is needed to estimate longer term performance of the test. The authors believe that alpha-defensin has demonstrated itself to be sufficiently robust that PJI diagnostic criteria now should include this test. Future studies are needed to compare the differences among the diagnostic capability of the available tests, in particular when metallosis is present, because metallosis may predispose the test to a false-positive result. Level of Evidence Level I, diagnostic study.