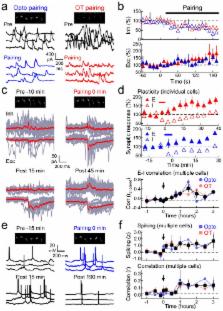 Oxytocin is important for social interactions and maternal behavior. However, little is known about when, where, and how oxytocin modulates neural circuits to improve social cognition. Here we show how oxytocin enables pup retrieval behavior in female mice by enhancing auditory cortical pup call responses. Retrieval behavior required left but not right auditory cortex, was accelerated by oxytocin in left auditory cortex, and oxytocin receptors were preferentially expressed in left auditory cortex. Neural responses to pup calls were lateralized, with co-tuned and temporally-precise excitatory and inhibitory responses in left cortex of maternal but not pup-naive adults. Finally, pairing calls with oxytocin enhanced responses by balancing the magnitude and timing of inhibition with excitation. Our results describe fundamental synaptic mechanisms by which oxytocin increases the salience of acoustic social stimuli. Furthermore, oxytocin-induced plasticity provides a biological basis for lateralization of auditory cortical processing.

A gene expression atlas of the central nervous system based on bacterial artificial chromosomes.

Mary Hatten,  Nathaniel Heintz,  Shannon Joyner … (2003)
The mammalian central nervous system (CNS) contains a remarkable array of neural cells, each with a complex pattern of connections that together generate perceptions and higher brain functions. Here we describe a large-scale screen to create an atlas of CNS gene expression at the cellular level, and to provide a library of verified bacterial artificial chromosome (BAC) vectors and transgenic mouse lines that offer experimental access to CNS regions, cell classes and pathways. We illustrate the use of this atlas to derive novel insights into gene function in neural cells, and into principal steps of CNS development. The atlas, library of BAC vectors and BAC transgenic mice generated in this screen provide a rich resource that allows a broad array of investigations not previously available to the neuroscience community.

The challenge of translation in social neuroscience: a review of oxytocin, vasopressin, and affiliative behavior.

Thomas Insel (2010)
Social neuroscience is rapidly exploring the complex territory between perception and action where recognition, value, and meaning are instantiated. This review follows the trail of research on oxytocin and vasopressin as an exemplar of one path for exploring the "dark matter" of social neuroscience. Studies across vertebrate species suggest that these neuropeptides are important for social cognition, with gender- and steroid-dependent effects. Comparative research in voles yields a model based on interspecies and intraspecies variation of the geography of oxytocin receptors and vasopressin V1a receptors in the forebrain. Highly affiliative species have receptors in brain circuits related to reward or reinforcement. The neuroanatomical distribution of these receptors may be guided by variations in the regulatory regions of their respective genes. This review describes the promises and problems of extrapolating these findings to human social cognition, with specific reference to the social deficits of autism. (c) 2010 Elsevier Inc. All rights reserved.

Elissar Andari,  Evelyn Herbrecht,  Jean-René Duhamel … (2010)
Social adaptation requires specific cognitive and emotional competences. Individuals with high-functioning autism or with Asperger syndrome cannot understand or engage in social situations despite preserved intellectual abilities. Recently, it has been suggested that oxytocin, a hormone known to promote mother-infant bonds, may be implicated in the social deficit of autism. We investigated the behavioral effects of oxytocin in 13 subjects with autism. In a simulated ball game where participants interacted with fictitious partners, we found that after oxytocin inhalation, patients exhibited stronger interactions with the most socially cooperative partner and reported enhanced feelings of trust and preference. Also, during free viewing of pictures of faces, oxytocin selectively increased patients' gazing time on the socially informative region of the face, namely the eyes. Thus, under oxytocin, patients respond more strongly to others and exhibit more appropriate social behavior and affect, suggesting a therapeutic potential of oxytocin through its action on a core dimension of autism.

Reprints and permissions information is available at www.nature.com/reprints