Physiology and pathophysiology of the vasopressin-regulated renal water reabsorption 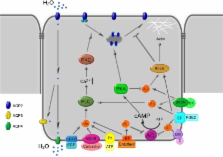 To prevent dehydration, terrestrial animals and humans have developed a sensitive and versatile system to maintain their water homeostasis. In states of hypernatremia or hypovolemia, the antidiuretic hormone vasopressin (AVP) is released from the pituitary and binds its type-2 receptor in renal principal cells. This triggers an intracellular cAMP signaling cascade, which phosphorylates aquaporin-2 (AQP2) and targets the channel to the apical plasma membrane. Driven by an osmotic gradient, pro-urinary water then passes the membrane through AQP2 and leaves the cell on the basolateral side via AQP3 and AQP4 water channels. When water homeostasis is restored, AVP levels decline, and AQP2 is internalized from the plasma membrane, leaving the plasma membrane watertight again. The action of AVP is counterbalanced by several hormones like prostaglandin E2, bradykinin, dopamine, endothelin-1, acetylcholine, epidermal growth factor, and purines. Moreover, AQP2 is strongly involved in the pathophysiology of disorders characterized by renal concentrating defects, as well as conditions associated with severe water retention. This review focuses on our recent increase in understanding of the molecular mechanisms underlying AVP-regulated renal water transport in both health and disease.

PKD2, a gene for polycystic kidney disease that encodes an integral membrane protein.

Jasper Saris,  Aaron Gabow,  T. Hayashi … (1996)
A second gene for autosomal dominant polycystic kidney disease was identified by positional cloning. Nonsense mutations in this gene (PKD2) segregated with the disease in three PKD2 families. The predicted 968-amino acid sequence of the PKD2 gene product has six transmembrane spans with intracellular amino- and carboxyl-termini. The PKD2 protein has amino acid similarity with PKD1, the Caenorhabditis elegans homolog of PKD1, and the family of voltage-activated calcium (and sodium) channels, and it contains a potential calcium-binding domain.

Mark J Millan,  K. Clark,  P. Harris … (1995)
Characterization of the polycystic kidney disease 1 (PKD1) gene has been complicated by genomic rearrangements on chromosome 16. We have used an exon linking strategy, taking RNA from a cell line containing PKD1 but not the duplicate loci, to clone a cDNA contig of the entire transcript. The transcript consists of 14,148 bp (including a correction to the previously described C terminus), distributed among 46 exons spanning 52 kb. The predicted PKD1 protein, polycystin, is a glycoprotein with multiple transmembrane domains and a cytoplasmic C-tail. The N-terminal extracellular region of over 2,500 aa contains leucine-rich repeats, a C-type lectin, 16 immunoglobulin-like repeats and four type III fibronectin-related domains. Our results indicate that polycystin is an integral membrane protein involved in cell-cell/matrix interactions.

Xiaofang Wang,  Christopher C. Harris,  Vincent H. Gattone … (2003)
The polycystic kidney diseases (PKDs) are a group of genetic disorders causing significant renal failure and death in children and adults. There are no effective treatments. Two childhood forms, autosomal recessive PKD (ARPKD) and nephronophthisis (NPH), are characterized by collecting-duct cysts. We used animal models orthologous to the human disorders to test whether a vasopressin V2 receptor (VPV2R) antagonist, OPC31260, would be effective against early or established disease. Adenosine-3',5'-cyclic monophosphate (cAMP) has a major role in cystogenesis, and the VPV2R is the major cAMP agonist in the collecting duct. OPC31260 administration lowered renal cAMP, inhibited disease development and either halted progression or caused regression of established disease. These results indicate that OPC31260 may be an effective treatment for these disorders and that clinical trials should be considered.