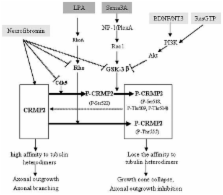 The collapsin response mediator proteins (CRMPs) were originally identified as mediators of semaphorin 3A signaling and neuronal differentiation. The CRMP family consists of five homologous cytosolic proteins, CRMP1-5. Altered expression levels of CRMPs have been observed in several malignant tumors, including lung, breast, colorectal, prostate, pancreatic and neuroendocrine lung cancer. The aim of the current study was to review the recent progress achieved in understanding the association between the different levels of CRMP expression in tumors and their involvement in pathological functions, such as tumor metastasis, disease progression, subtype differentiation and clinical outcome, to address the potential value of CRMPs as biomarkers for the diagnosis and prognosis of cancer patients.

Yu-Liang Leon Guo,  Andrew W. Bollen,  N. K. Watson … (2005)
Glioblastoma multiforme (GBM) is the most common form of malignant glioma, characterized by genetic instability, intratumoral histopathological variability, and unpredictable clinical behavior. We investigated global gene expression in surgical samples of brain tumors. Gene expression profiling revealed large differences between normal brain samples and tumor tissues and between GBMs and lower-grade oligodendroglial tumors. Extensive differences in gene expression were found among GBMs, particularly in genes involved in angiogenesis, immune cell infiltration, and extracellular matrix remodeling. We found that the gene expression patterns in paired specimens from the same GBM invariably were more closely related to each other than to any other tumor, even when the paired specimens had strikingly divergent histologies. Survival analyses revealed a set of approximately 70 genes more highly expressed in rapidly progressing tumors that stratified GBMs into two groups that differed by >4-fold in median duration of survival. We further investigated one gene from the group, FABP7, and confirmed its association with survival in two unrelated cohorts totaling 105 patients. Expression of FABP7 enhanced the motility of glioma-derived cells in vitro. Our analyses thus identify and validate a prognostic marker of both biologic and clinical significance and provide a series of putative markers for additional evaluation.

Takashi Shiromizu,  C Ménager,  R L H Watanabe … (2002)
Regulated increase in the formation of microtubule arrays is thought to be important for axonal growth. Collapsin response mediator protein-2 (CRMP-2) is a mammalian homologue of UNC-33, mutations in which result in abnormal axon termination. We recently demonstrated that CRMP-2 is critical for axonal differentiation. Here, we identify two activities of CRMP-2: tubulin-heterodimer binding and the promotion of microtubule assembly. CRMP-2 bound tubulin dimers with higher affinity than it bound microtubules. Association of CRMP-2 with microtubules was enhanced by tubulin polymerization in the presence of CRMP-2. The binding property of CRMP-2 with tubulin was apparently distinct from that of Tau, which preferentially bound microtubules. In neurons, overexpression of CRMP-2 promoted axonal growth and branching. A mutant of CRMP-2, lacking the region responsible for microtubule assembly, inhibited axonal growth and branching in a dominant-negative manner. Taken together, our results suggest that CRMP-2 regulates axonal growth and branching as a partner of the tubulin heterodimer, in a different fashion from traditional MAPs.