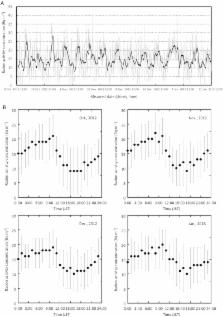 Due to the Fukushima Daiichi Nuclear Power Plant (FDNPP) accident, the evacuees from Namie Town still cannot reside in the town, and some continue to live in temporary housing units. In this study, the radon activity concentrations were measured at temporary housing facilities, apartments and detached houses in Fukushima Prefecture in order to estimate the annual internal exposure dose of residents. A passive radon–thoron monitor (using a CR-39) and a pulse-type ionization chamber were used to evaluate the radon activity concentration. The average radon activity concentrations at temporary housing units, including a medical clinic, apartments and detached houses, were 5, 7 and 9 Bq m −3, respectively. Assuming the residents lived in these facilities for one year, the average annual effective doses due to indoor radon in each housing type were evaluated as 0.18, 0.22 and 0.29 mSv, respectively. The average effective doses to all residents in Fukushima Prefecture due to natural and artificial sources were estimated using the results of the indoor radon measurements and published data. The average effective dose due to natural sources for the evacuees from Namie Town was estimated to be 1.9 mSv. In comparison, for the first year after the FDNPP accident, the average effective dose for the evacuees due to artificial sources from the accident was 5.0 mSv. Although residents' internal and external exposures due to natural radionuclides cannot be avoided, it might be possible to lower external exposure due to the artificial radionuclides by changing some behaviors of residents.

Thyroid doses for evacuees from the Fukushima nuclear accident

Shinji Tokonami,  Masahiro Hosoda,  Suminori Akiba … (2012)
A primary health concern among residents and evacuees in affected areas immediately after a nuclear accident is the internal exposure of the thyroid to radioiodine, particularly I-131, and subsequent thyroid cancer risk. In Japan, the natural disasters of the earthquake and tsunami in March 2011 destroyed an important function of the Fukushima Daiichi Nuclear Power Plant (F1-NPP) and a large amount of radioactive material was released to the environment. Here we report for the first time extensive measurements of the exposure to I-131 revealing I-131 activity in the thyroid of 46 out of the 62 residents and evacuees measured. The median thyroid equivalent dose was estimated to be 4.2 mSv and 3.5 mSv for children and adults, respectively, much smaller than the mean thyroid dose in the Chernobyl accident (490 mSv in evacuees). Maximum thyroid doses for children and adults were 23 mSv and 33 mSv, respectively.

Tetsuo Ishikawa,  Seiji Yasumura,  Kotaro Ozasa … (2015)
The Fukushima Health Management Survey (including the Basic Survey for external dose estimation and four detailed surveys) was launched after the Fukushima Dai-ichi Nuclear Power Plant accident. The Basic Survey consists of a questionnaire that asks Fukushima Prefecture residents about their behavior in the first four months after the accident; and responses to the questionnaire have been returned from many residents. The individual external doses are estimated by using digitized behavior data and a computer program that included daily gamma ray dose rate maps drawn after the accident. The individual external doses of 421,394 residents for the first four months (excluding radiation workers) had a distribution as follows: 62.0%, <1 mSv; 94.0%, <2 mSv; 99.4%, <3 mSv. The arithmetic mean and maximum for the individual external doses were 0.8 and 25 mSv, respectively. While most dose estimation studies were based on typical scenarios of evacuation and time spent inside/outside, the Basic Survey estimated doses considering individually different personal behaviors. Thus, doses for some individuals who did not follow typical scenarios could be revealed. Even considering such extreme cases, the estimated external doses were generally low and no discernible increased incidence of radiation-related health effects is expected.