Intergluteal Cleft Eccrine Porocarcinoma with Metastasis to Inguinal Region and Lung: Case Report and Review of the Literature 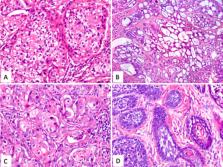 Eccrine porocarcinoma (EPC) is an infrequent cutaneous neoplasm, and was described in 1963 by Pinkus and Mehregan. It is a rare type of skin tumor (0.005–0.01% of all skin tumors). Less than 300 cases have been described in the entire world medical literature. To our knowledge, no case of intergluteal cleft EPC has been reported in the literature in English and Spanish to date, so this would be the first reported case of such pathology. Metastatic EPC is less frequent, since only <10% of metastatic type have been reported and the rest as localized disease. The primary treatment of choice is surgical wide local excision of the tumor with histological confirmation of tumor-free margins. Prognosis is difficult to determine because of the rarity of EPC and the variations in natural history. There are no data to support the use of adjuvant chemotherapy or radiotherapy, and there are currently no agreed criteria to define patients at high risk of relapse. We present a 67-year-old man with intergluteal cleft eccrine tumor by biopsy. Metastasis to left inguinal region and lung was reported by contrasted abdominal and chest computed tomography. He started chemotherapy based on etoposide, vincristine, carboplatin. A review of pertinent literature is provided.

A. Robson,  J. Greene,  N. Ansari … (2001)
The clinicopathologic characteristics of 69 cases of eccrine porocarcinoma (EP) have been studied. Seven cases of purely in situ disease are included. Forty patients were female, 29 male with ages ranging from 29 to 91 years (mean 73 years). The lower extremity represented the single most common site (44%). Other common sites were the trunk (15 cases, 24%) and head (11 cases, 18%). The histologic diagnosis of EP was predicated on the basis of an irregular tumor at least partly formed of characteristic poromatous basaloid epithelial cells displaying ductal differentiation, and significant cytologic atypia. Forty-seven tumors (68%) contained mature well-formed eccrine ducts having an eosinophilic luminal cuticle, with the remaining tumors containing small ill-formed ducts and/or intracytoplasmic lumina. All ducts were discernible via light microscopy and in 49 cases were highlighted with DPAS stain and/or CEA/EMA immunocytochemistry. A variant with a broad pushing tumor margin and marked nuclear pleomorphism showed some resemblance to proliferative bowenoid dysplasia. In 11 cases (18%) the tumors appeared to arise in continuity with a benign preexistent poroma. A variety of histologic patterns were displayed including clear, squamous, and spindle cell differentiation, mucus cell metaplasia, and colonization by melanocytes. Lymphovascular invasion was present in 9 cases (15%). Three cases showed pagetoid extension of malignant cells (epidermotropism) and appeared to be multifocal. Follow-up was available in 54 patients (78%) with 9 (17%) experiencing local recurrence, 10 developing lymph node metastases (19%), and 6 (11%) experiencing distant metastases or death. Mitoses, the presence of lymphovascular invasion, and tumor depth >7 mm were associated with a poorer prognosis. Dividing tumors into those with a "pushing" or "infiltrating" advancing margin was also predictive of outcome with the latter having an increased risk of local recurrence. This report, the largest series of EP to date, suggests that the incidence of aggressive behavior is less than popularly believed. Furthermore, EP can display a wide variety of histologic patterns that may lead to diagnostic error in the unwary. The large number of cases in this series enables a reliable evaluation of prognostic parameters. A more aggressive clinical course may be indicated by more than 14 mitoses per high power field (hazard ratio [HR] for death 17.0, 95% confidence interval [CI] 2.71-107), lymphovascular invasion by tumor (HR 4.41, CI 1.13-17.2), and depth >7 mm (HR 5.49, CI 1.0-30.3). Thus, mitoses, lymphovascular invasion, and tumor depth should be evaluated in these tumors. We also suggest that tumors presenting an "infiltrative" advancing margin are particularly prone to local recurrence and require wide excision with close attention to the surgical margins by the reporting pathologist.

A Mehregan,  H Rahbari,  K Hashimoto (1983)
A clinicopathologic study was made of 35 patients with primary eccrine adenocarcinoma diagnosed in the past 20 years from among 450,000 consecutive skin biopsy specimens. Histologically the following four distinct variants were identified: eccrine porocarcinoma (18 cases), syringoid eccrine carcinoma (12 cases), mucinous eccrine carcinoma (three cases), and clear cell eccrine carcinoma (two cases). Overall, eccrine adenocarcinomas are destructive lesions with a tendency to local recurrence. The syringoid histologic variant appears to be well differentiated and may have a benign clinical course; the lesion remained localized to the skin in our 12 cases. Regional lymphatic and distant metastasis, however, occurred in two patients with eccrine porocarcinoma.