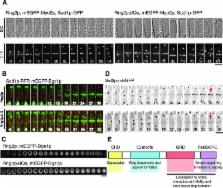 Rng2p is required for both the normal process of contractile ring formation from precursor nodes and an alternative mechanism by which rings form from strands of actin filaments, as well as for ring constriction. Systematic analysis of domain deletion mutants establishes how the four domains of Rng2p contribute to cytokinesis.

Eukaryotic cells require IQGAP family multidomain adapter proteins for cytokinesis, but many questions remain about how IQGAPs contribute to the process. Here we show that fission yeast IQGAP Rng2p is required for both the normal process of contractile ring formation from precursor nodes and an alternative mechanism by which rings form from strands of actin filaments. Our work adds to previous studies suggesting a role for Rng2p in node and ring formation. We demonstrate that Rng2p is also required for normal ring constriction and septum formation. Systematic analysis of domain-deletion mutants established how the four domains of Rng2p contribute to cytokinesis. Contrary to a previous report, the actin-binding calponin homology domain of Rng2p is not required for viability, ring formation, or ring constriction. The IQ motifs are not required for ring formation but are important for ring constriction and septum formation. The GTPase-activating protein (GAP)–related domain is required for node-based ring formation. The Rng2p C-terminal domain is the only domain essential for viability. Our studies identified several distinct functions of Rng2 at multiple stages of cytokinesis.

J. Howard Pringle,  Alexander Steever,  Jurg Bahler … (1998)
We describe a straightforward PCR-based approach to the deletion, tagging, and overexpression of genes in their normal chromosomal locations in the fission yeast Schizosaccharomyces pombe. Using this approach and the S. pombe ura4+ gene as a marker, nine genes were deleted with efficiencies of homologous integration ranging from 6 to 63%. We also constructed a series of plasmids containing the kanMX6 module, which allows selection of G418-resistant cells and thus provides a new heterologous marker for use in S. pombe. The modular nature of these constructs allows a small number of PCR primers to be used for a wide variety of gene manipulations, including deletion, overexpression (using the regulatable nmt1 promoter), C- or N-terminal protein tagging (with HA, Myc, GST, or GFP), and partial C- or N-terminal deletions with or without tagging. Nine genes were manipulated using these kanMX6 constructs as templates for PCR. The PCR primers included 60 to 80 bp of flanking sequences homologous to target sequences in the genome. Transformants were screened for homologous integration by PCR. In most cases, the efficiency of homologous integration was > or = 50%, and the lowest efficiency encountered was 17%. The methodology and constructs described here should greatly facilitate analysis of gene function in S. pombe.

Thomas Pollard,  Jian Wu (2005)
We used fluorescence microscopy to measure global and local concentrations of 28 cytoskeletal and signaling proteins fused to yellow fluorescent protein (YFP) in the fission yeast Schizosaccharomyces pombe. Native promoters controlled the expression of these functional YFP fusion proteins. Fluorescence measured by microscopy or flow cytometry was directly proportional to protein concentration measured by quantitative immunoblotting. Global cytoplasmic concentrations ranged from 0.04 (formin Cdc12p) to 63 micromolar (actin). Proteins concentrated up to 100 times in contractile rings and 7500 times in spindle pole bodies at certain times in the cell cycle. This approach can be used to measure the global and local concentrations of any fusion protein.

Paul Nurse,  Adeline Mayeux,  Anne Paoletti … (2009)
Many eukaryotic cell types undergo size-dependent cell cycle transitions controlled by the ubiquitous cyclin-dependent kinase Cdk1 (refs 1-4). The proteins that control Cdk1 activity are well described but their links with mechanisms monitoring cell size remain elusive. In the fission yeast Schizosaccharomyces pombe, cells enter mitosis and divide at a defined and reproducible size owing to the regulated activity of Cdk1 (refs 2, 3). Here we show that the cell polarity protein kinase Pom1, which localizes to cell ends, regulates a signalling network that contributes to the control of mitotic entry. This network is located at cortical nodes in the middle of interphase cells, and these nodes contain the Cdk1 inhibitor Wee1, the Wee1-inhibitory kinases Cdr1 (also known as Nim1) and Cdr2, and the anillin-like protein Mid1. Cdr2 establishes the hierarchical localization of other proteins in the nodes, and receives negative regulatory signals from Pom1. Pom1 forms a polar gradient extending from the cell ends towards the cell middle and acts as a dose-dependent inhibitor of mitotic entry, working through the Cdr2 pathway. As cells elongate, Pom1 levels decrease at the cell middle, leading to mitotic entry. We propose that the Pom1 polar gradient and the medial cortical nodes generate information about cell size and coordinate this with mitotic entry by regulating Cdk1 through Pom1, Cdr2, Cdr1 and Wee1.