Archives: The law of homologous series in variation (N. I. Vavilov) 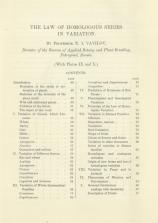