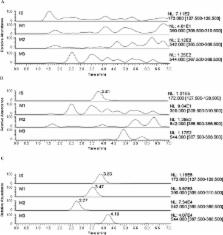 The lack of authentic standards has limited the quantitative analysis of herbal drugs in biological samples. The present work demonstrated a practicable strategy for the assay of herbs and their metabolites independent of authentic standards. A liquid chromatography– electrospray ionization–mass spectrometry (LC–ESI–MS) method for the qualitative and quantitative determination of the metabolites after oral administration of Rhizome coptidis and Zuojinwan preparation in rat urine has been developed. Urine samples, extracted with a protein precipitation procedure were separated on a C 18 column using a mixture of water (containing 0.1% formic acid) and acetonitrile (30:70, v/v) as mobile phase. The detection was performed via MS with electrospray ionization interface in positive selected reaction monitoring (SRM) mode. One urine sample after administration was selected as ‹standard›. The method validation was carried out according to a conventional method which was calibrated by authentic standards. The fully validated method was applied to the pharmacokinetic study of 2,9-demethyljateorhizine-3-sulfate, 13-methoxyjateorhizine-3- glucoronide and 6-methyljateorhizine-5-glucoronide in rat urine. The results could provide evidence to explain the combination of Rhizome coptidis and Evodiae fructus in terms of elimination.

Pharmacokinetics of berberine and its main metabolites in conventional and pseudo germ-free rats determined by liquid chromatography/ion trap mass spectrometry.

T Akao,  Masao Hattori,  Norio Nakamura … (2006)
Berberine (Ber) and its main metabolites were identified and quantified using liquid chromatography/electrospray ionization/ion trap mass spectrometry. Rat plasma contained the main metabolites, berberrubine, thalifendine, demethyleneberberine, and jatrorrhizine, as free and glucuronide conjugates after p.o. Ber administration. Moreover, the original drug, the four main metabolites, and their glucuronide conjugates were all detected in liver tissues after 0.5 h and in bile samples 1 h after p.o. Ber administration. Therefore, the metabolic site seemed to be the liver, and the metabolites and conjugates were evidently excreted into the duodenum as bile. The pharmacokinetics of Ber and the four metabolites were determined in conventional and pseudo germ-free rats (treated with antibiotics) after p.o. administration with 40 mg/kg Ber. The AUC0-limt and mean transit time values of the metabolites significantly differed between conventional and pseudo germ-free rats. The amounts of metabolites were remarkably reduced in the pseudo germ-free rats, whereas levels of Ber did not obviously differ between the two groups. The intestinal flora did not exert significant metabolic activity against Ber and its metabolites, but it played a significant role in the enterohepatic circulation of metabolites. In this sense, the liver and intestinal bacteria participate in the metabolism and disposition of Ber in vivo.

Medicinal herbs for the treatment of rheumatic disorders--a survey of European herbals from the 16th and 17th century.

Michael Adams,  Caroline Berset,  Michael Kessler … (2009)
From the 16th up into the 18th century botanical and medicinal knowledge in Europe was documented and spread in magnificently illustrated herbals. For the most part modern science has neglected this source of knowledge and old remedies have not been systematically evaluated pharmacologically. Rheumatic disorders and chronic inflammatory and degenerative diseases of the musculoskeletal system were chosen in an attempt to discuss remedies described in the old herbals in the viewpoint of modern science. Five of the most important European herbals of the 16th and 17th century were searched for terms related to rheumatic diseases, and plants and recipes described for their treatment. An extensive search of the scientific data banks Medline and SciFinder scholar was done to find recent results concerning the phytochemistry and possible antiphlogistic activities of the plants. Sixty-three plants were identified in the herbals for this indication. More than half of them have shown in vitro or in vivo antiphlogistic activities. European herbals may be a valuable source of information for the selection of plants for focussed screening programmes. Information contained in these herbals should be explored in a systematic manner.

Daowu Wang,  Zhiqiang Liu,  Mingquan Guo … (2004)
Simple, convenient, sensitive and accurate analytical methods are needed for the structural characterization and identification of alkaloid components in Rhizoma Coptidis in traditional Chinese herbal medicine, which has important bioactivity. In this work, the identification of alkaloid compounds in Rhizoma Coptidis was investigated by obtaining molecular mass information using electrospray ionization mass spectrometry (ESI-MS). Multi-stage tandem mass spectrometric (ESI-MS(n)) data for the alkaloid compounds were used for detailed structural characterization, then structure information was obtained by comparison of the fragmentation mechanisms of both alkaloids in Rhizoma Coptidis and standard samples of berberine, palmatine, coptisine and jatrorrhizine by MS. Based on the results obtained, the structure of a novel compound was elucidated. The results of the experiments demonstrate that ESI-MS(n) is a sensitive, selective and effective tool for the rapid determination of alkaloids in Rhizoma Coptidis.