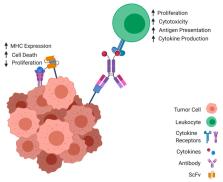 Cytokine therapy for cancer has indicated efficacy in certain diseases but is generally accompanied by severe toxicity. The field of antibody–cytokine fusion proteins (immunocytokines) arose to target these effector molecules to the tumor environment in order to expand the therapeutic window of cytokine therapy. Pre-clinical evidence has shown the increased efficacy and decreased toxicity of various immunocytokines when compared to their cognate unconjugated cytokine. These anti-tumor properties are markedly enhanced when combined with other treatments such as chemotherapy, radiotherapy, and checkpoint inhibitor antibodies. Clinical trials that have continued to explore the potential of these biologics for cancer therapy have been conducted. This review covers the in vitro, in vivo, and clinical evidence for the application of immunocytokines in immuno-oncology.

Gavin Dunn,  Allen T. Bruce,  Hiroaki Ikeda … (2002)
The concept that the immune system can recognize and destroy nascent transformed cells was originally embodied in the cancer immunosurveillance hypothesis of Burnet and Thomas. This hypothesis was abandoned shortly afterwards because of the absence of strong experimental evidence supporting the concept. New data, however, clearly show the existence of cancer immunosurveillance and also indicate that it may function as a component of a more general process of cancer immunoediting. This process is responsible for both eliminating tumors and sculpting the immunogenic phenotypes of tumors that eventually form in immunocompetent hosts. In this review, we will summarize the historical and experimental basis of cancer immunoediting and discuss its dual roles in promoting host protection against cancer and facilitating tumor escape from immune destruction.

Philip Kantoff,  Celestia Higano,  Neal Shore … (2010)
Sipuleucel-T, an autologous active cellular immunotherapy, has shown evidence of efficacy in reducing the risk of death among men with metastatic castration-resistant prostate cancer. In this double-blind, placebo-controlled, multicenter phase 3 trial, we randomly assigned 512 patients in a 2:1 ratio to receive either sipuleucel-T (341 patients) or placebo (171 patients) administered intravenously every 2 weeks, for a total of three infusions. The primary end point was overall survival, analyzed by means of a stratified Cox regression model adjusted for baseline levels of serum prostate-specific antigen (PSA) and lactate dehydrogenase. In the sipuleucel-T group, there was a relative reduction of 22% in the risk of death as compared with the placebo group (hazard ratio, 0.78; 95% confidence interval [CI], 0.61 to 0.98; P=0.03). This reduction represented a 4.1-month improvement in median survival (25.8 months in the sipuleucel-T group vs. 21.7 months in the placebo group). The 36-month survival probability was 31.7% in the sipuleucel-T group versus 23.0% in the placebo group. The treatment effect was also observed with the use of an unadjusted Cox model and a log-rank test (hazard ratio, 0.77; 95% CI, 0.61 to 0.97; P=0.02) and after adjustment for use of docetaxel after the study therapy (hazard ratio, 0.78; 95% CI, 0.62 to 0.98; P=0.03). The time to objective disease progression was similar in the two study groups. Immune responses to the immunizing antigen were observed in patients who received sipuleucel-T. Adverse events that were more frequently reported in the sipuleucel-T group than in the placebo group included chills, fever, and headache. The use of sipuleucel-T prolonged overall survival among men with metastatic castration-resistant prostate cancer. No effect on the time to disease progression was observed. (Funded by Dendreon; ClinicalTrials.gov number, NCT00065442.)

Jos H. Beijnen,  Alwin D. R. Huitema,  Ron J. Keizer … (2010)
Monoclonal antibodies (mAbs) have been used in the treatment of various diseases for over 20 years and combine high specificity with generally low toxicity. Their pharmacokinetic properties differ markedly from those of non-antibody-type drugs, and these properties can have important clinical implications. mAbs are administered intravenously, intramuscularly or subcutaneously. Oral administration is precluded by the molecular size, hydrophilicity and gastric degradation of mAbs. Distribution into tissue is slow because of the molecular size of mAbs, and volumes of distribution are generally low. mAbs are metabolized to peptides and amino acids in several tissues, by circulating phagocytic cells or by their target antigen-containing cells. Antibodies and endogenous immunoglobulins are protected from degradation by binding to protective receptors (the neonatal Fc-receptor [FcRn]), which explains their long elimination half-lives (up to 4 weeks). Population pharmacokinetic analyses have been applied in assessing covariates in the disposition of mAbs. Both linear and nonlinear elimination have been reported for mAbs, which is probably caused by target-mediated disposition. Possible factors influencing elimination of mAbs include the amount of the target antigen, immune reactions to the antibody and patient demographics. Bodyweight and/or body surface area are generally related to clearance of mAbs, but clinical relevance is often low. Metabolic drug-drug interactions are rare for mAbs. Exposure-response relationships have been described for some mAbs. In conclusion, the parenteral administration, slow tissue distribution and long elimination half-life are the most pronounced clinical pharmacokinetic characteristics of mAbs.