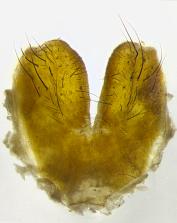 We describe one new genus and its one new species from Area de Conservación Guanacaste (ACG) in northwestern Costa Rica. Our study provides a concise description of this new species using morphology, life history, molecular data and photographic documentation.

Chorotegamyia gen. n. is described, along with its type species, Chorotegamyia aureofacies sp. n. A modified key to the Uramyini is given to further elucidate the tribe.

M. Alex Smith, Josephine J. Rodriguez, James B. Whitfield … (2008)
We DNA barcoded 2,597 parasitoid wasps belonging to 6 microgastrine braconid genera reared from parapatric tropical dry forest, cloud forest, and rain forest in Area de Conservación Guanacaste (ACG) in northwestern Costa Rica and combined these data with records of caterpillar hosts and morphological analyses. We asked whether barcoding and morphology discover the same provisional species and whether the biological entities revealed by our analysis are congruent with wasp host specificity. Morphological analysis revealed 171 provisional species, but barcoding exposed an additional 142 provisional species; 95% of the total is likely to be undescribed. These 313 provisional species are extraordinarily host specific; more than 90% attack only 1 or 2 species of caterpillars out of more than 3,500 species sampled. The most extreme case of overlooked diversity is the morphospecies Apanteles leucostigmus. This minute black wasp with a distinctive white wing stigma was thought to parasitize 32 species of ACG hesperiid caterpillars, but barcoding revealed 36 provisional species, each attacking one or a very few closely related species of caterpillars. When host records and/or within-ACG distributions suggested that DNA barcoding had missed a species-pair, or when provisional species were separated only by slight differences in their barcodes, we examined nuclear sequences to test hypotheses of presumptive species boundaries and to further probe host specificity. Our iterative process of combining morphological analysis, ecology, and DNA barcoding and reiteratively using specimens maintained in permanent collections has resulted in a much more fine-scaled understanding of parasitoid diversity and host specificity than any one of these elements could have produced on its own.

M A Smith, N. Woodley, D. Janzen … (2006)
Insect parasitoids are a major component of global biodiversity and affect the population dynamics of their hosts. However, identification of insect parasitoids is often difficult, and they are suspected to contain many cryptic species. Here, we ask whether the cytochrome c oxidase I DNA barcode could function as a tool for species identification and discovery for the 20 morphospecies of Belvosia parasitoid flies (Diptera: Tachinidae) that have been reared from caterpillars (Lepidoptera) in Area de Conservación Guanacaste (ACG), northwestern Costa Rica. Barcoding not only discriminates among all 17 highly host-specific morphospecies of ACG Belvosia, but it also raises the species count to 32 by revealing that each of the three generalist species are actually arrays of highly host-specific cryptic species. We also identified likely hybridization among Belvosia by using a variable internal transcribed spacer region 1 nuclear rDNA sequence as a genetic covariate in addition to the strategy of overlaying barcode clusters with ecological information. If general, these results will increase estimates of global species richness and imply that tropical conservation and host-parasite interactions may be more complex than expected.