Benralizumab in the treatment of severe asthma: design, development and potential place in therapy 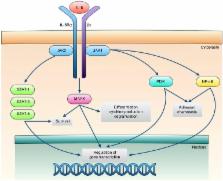 Asthma is a widespread and heterogeneous inflammatory disease of the airways, which is characterized by several different phenotypes and endotypes. In particular, eosinophilic airway inflammation is a common pathologic trait of both allergic and nonallergic asthma. The key cytokine responsible for maturation, activation, recruitment, and survival of eosinophils is interleukin (IL)-5, which is mainly produced by T helper 2 (Th2) lymphocytes and group 2 innate lymphoid cells. Therefore, for uncontrolled patients with severe eosinophilic asthma, who are not fully responsive to corticosteroids, IL-5 represents a very important molecular target for add-on biological therapies. Among these new treatments, anti-IL-5 monoclonal antibodies such as mepolizumab and reslizumab have been developed and clinically evaluated. Furthermore, benralizumab is currently the only available biologic drug that specifically binds to the IL-5 receptor, thus preventing the interaction with its ligand and the consequent pro-inflammatory effects. The effectiveness of benralizumab in improving severe eosinophilic asthma has been well-documented by many randomized controlled trials.

P Chanez,  P. Godard,  Philippe J Bousquet … (1990)
The importance of eosinophils in the pathogenesis of bronchial asthma is not established. In an attempt to evaluate the role of eosinophilic inflammation in asthma, we compared 10 normal subjects with 43 patients with chronic asthma, 19 of whom had severe disease as assessed by a clinical scoring method described by Aas and by pulmonary-function tests. Eosinophils were counted in peripheral blood and bronchoalveolar-lavage fluid, and in biopsy specimens obtained from the patients and post mortem from 8 subjects without asthma, but not from the 10 normal controls. Eosinophil cationic protein was titrated by radioimmunoassay in the bronchoalveolar-lavage fluid from all subjects and studied by immunohistochemistry in the biopsy specimens. There was a significant increase in the number of peripheral-blood eosinophils in the patients that was correlated with the clinical severity of asthma (P less than 0.001) and pulmonary function (P less than 0.03). Levels of eosinophils and eosinophil cationic protein were increased in the bronchoalveolar-lavage fluid from the patients and were also correlated with the severity of asthma (P less than 0.001 and P less than 0.002, respectively). Hematoxylin-eosin staining of bronchial-biopsy specimens showed that intraepithelial eosinophils were present only in patients with asthma. Immunohistochemical analysis of eosinophil cationic protein revealed that normal subjects had only a few nondegranulated eosinophils deep in the submucosa, whereas all the patients had degranulated eosinophils beneath the basement membrane and among epithelial cells. In some patients there was a relation between the presence of degranulated eosinophils and epithelial damage. Eosinophilic inflammation of the airways is correlated with the severity of asthma. These cells are likely to play a part in the epithelial damage seen in this disease.