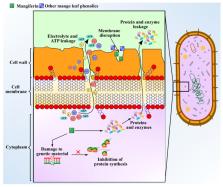 Mangifera indica L. belongs to the family of Anacardiaceae and is an important fruit from South and Southeast Asia. India, China, Thailand, Indonesia, Pakistan, Mexico, Brazil, Bangladesh, Nigeria, and the Philippines are among the top mango producer countries. Leaves of the mango plant have been studied for their health benefits, which are attributed to a plethora of phytochemicals such as mangiferin, followed by phenolic acids, benzophenones, and other antioxidants such as flavonoids, ascorbic acid, carotenoids, and tocopherols. The extracts from mango leaves (MLs) have been studied for their biological activities, including anti-cancer, anti-diabetic, anti-oxidant, anti-microbial, anti-obesity, lipid-lowering, hepato-protection, and anti-diarrheal. In the present review, we have elaborated on the nutritional and phytochemical profile of the MLs. Further, various bioactivities of the ML extracts are also critically discussed. Considering the phytochemical profile and beneficial effects of the MLs, they can be used as a potential ingredient for the development of functional foods and pharmaceutical drugs. However, more detailed clinical trials still needed to be conducted for establishing the actual efficacy of the ML extracts.

Measuring the global burden of disease and epidemiological transitions: 2002-2030.

A. Lopez,  C Mathers (2015)
Any planning process for health development ought to be based on a thorough understanding of the health needs of the population. This should be sufficiently comprehensive to include the causes of premature death and of disability, as well as the major risk factors that underlie disease and injury. To be truly useful to inform health-policy debates, such an assessment is needed across a large number of diseases, injuries and risk factors, in order to guide prioritization. The results of the original Global Burden of Disease Study and, particularly, those of its 2000-2002 update provide a conceptual and methodological framework to quantify and compare the health of populations using a summary measure of both mortality and disability: the disability-adjusted life-year (DALY). Globally, it appears that about 56 million deaths occur each year, 10.5 million (almost all in poor countries) in children. Of the child deaths, about one-fifth result from perinatal causes such as birth asphyxia and birth trauma, and only slightly less from lower respiratory infections. Annually, diarrhoeal diseases kill over 1.5 million children, and malaria, measles and HIV/AIDS each claim between 500,000 and 800,000 children. HIV/AIDS is the fourth leading cause of death world-wide (2.9 million deaths) and the leading cause in Africa. The top three causes of death globally are ischaemic heart disease (7.2 million deaths), stroke (5.5 million) and lower respiratory diseases (3.9 million). Chronic obstructive lung diseases (COPD) cause almost as many deaths as HIV/AIDS (2.7 million). The leading causes of DALY, on the other hand, include causes that are common at young ages [perinatal conditions (7.1% of global DALY), lower respiratory infections (6.7%), and diarrhoeal diseases (4.7%)] as well as depression (4.1%). Ischaemic heart disease and stroke rank sixth and seventh, retrospectively, as causes of global disease burden, followed by road traffic accidents, malaria and tuberculosis. Projections to 2030 indicate that, although these major vascular diseases will remain leading causes of global disease burden, with HIV/AIDS the leading cause, diarrhoeal diseases and lower respiratory infections will be outranked by COPD, in part reflecting the projected increases in death and disability from tobacco use.

Polyphenols and their benefits: A review

G Würtele,  Maria Trevisan,  E B Brito … (2008)
The contents of secondary plant substances in solvent extracts of various byproducts (barks, kernels, peels, and old and young leaves) in a range of Brazilian mango cultivars were identified and quantitated. The results show that the profiles of secondary plant substances such as xanthone C-glycosides, gallotannins, and benzophenones in different byproducts vary greatly but are fairly consistent across cultivars. The free radical scavenging activity of the solvent extracts was evaluated using a high-performance liquid chromatography-based hypoxanthine/xanthine oxidase assay and revealed dose-dependent antioxidant capacity in all extracts. Four (mangiferin, penta- O-galloyl-glucoside gallic acid, and methyl gallate) of the major phenolic compounds detected were also evaluated in additional in vitro bioassay systems such as oxygen radical absorbance capacity, 2,2-diphenyl-1-picrylhydrazyl, and ferric reducing ability of plasma. Mangiferin in particular, detected at high concentrations in young leaves (Coite = 172 g/kg), in bark (Momika = 107 g/kg), and in old leaves (Itamaraka = 94 g/kg), shows an exceptionally strong antioxidant capacity.