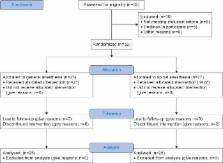 Between July 2015 and July 2016, 50 patients were prospectively randomized to either the GA TEP group (Group I) or the SA TEP group (Group II). Propofol, fentanyl, rocuronium, sevoflurane, and tracheal intubation were used for GA. Hyperbaric bupivacaine (15 mg) and fentanyl (10 µg) were used for SA to achieve a sensorial level of T 3. Intraoperative events related to SA, operative and anesthesia times, postoperative complications, and pain scores were recorded. Each patient was asked to evaluate the anesthetic technique by using a direct questionnaire filled in 3 months after the operation.

All the procedures were completed by the allocated method of anesthesia as there were no conversions from SA to GA. Pain was significantly less for 1 h ( P<0.0001) and 4 h ( P=0.002) after the procedure for the SA and GA groups, respectively. There was no difference between the two groups regarding complications, hospital stay, recovery, or surgery time. Generally, patients were more satisfied with SA than GA ( P<0.020).

TEP inguinal hernia repair can be safely performed under SA, and SA was associated with less postoperative pain, better recovery, and better patient satisfaction than GA.

A simplified risk score for predicting postoperative nausea and vomiting: conclusions from cross-validations between two centers.

M Koivuranta,  E Läärä,  N Roewer … (1999)
Recently, two centers have independently developed a risk score for predicting postoperative nausea and vomiting (PONV). This study investigated (1) whether risk scores are valid across centers and (2) whether risk scores based on logistic regression coefficients can be simplified without loss of discriminating power. Adult patients from two centers (Oulu, Finland: n = 520, and Wuerzburg, Germany: n = 2202) received inhalational anesthesia (without antiemetic prophylaxis) for various types of surgery. PONV was defined as nausea or vomiting within 24 h of surgery. Risk scores to estimate the probability of PONV were obtained by fitting logistic regression models. Simplified risk scores were constructed based on the number of risk factors that were found significant in the logistic regression analyses. Original and simplified scores were cross-validated. A combined data set was created to estimate a potential center effect and to construct a final risk score. The discriminating power of each score was assessed using the area under the receiver operating characteristic curves. Risk scores derived from one center were able to predict PONV from the other center (area under the curve = 0.65-0.75). Simplification did not essentially weaken the discriminating power (area under the curve = 0.63-0.73). No center effect could be detected in a combined data set (odds ratio = 1.06, 95% confidence interval = 0.71-1.59). The final score consisted of four predictors: female gender, history of motion sickness (MS) or PONV, nonsmoking, and the use of postoperative opioids. If none, one, two, three, or four of these risk factors were present, the incidences of PONV were 10%, 21%, 39%, 61% and 79%. The risk scores derived from one center proved valid in the other and could be simplified without significant loss of discriminating power. Therefore, it appears that this risk score has broad applicability in predicting PONV in adult patients undergoing inhalational anesthesia for various types of surgery. For patients with at least two out of these four identified predictors a prophylactic antiemetic strategy should be considered.

K McCormack,  Jeffrey Ross,   … (2002)
Inguinal hernia repair is the most frequently performed operation in general surgery. The standard method for inguinal hernia repair had changed little over a hundred years until the introduction of synthetic mesh. This mesh can be placed by either using an open approach or by using a minimal access laparoscopic technique. Although many studies have explored the relative merits and potential risks of laparoscopic surgery for the repair of inguinal hernia, most individual trials have been too small to show clear benefits of one type of surgical repair over another. The objective of this review was to compare minimal access laparoscopic mesh techniques with open techniques. Comparisons of open mesh techniques versus open non-mesh techniques have been considered in a separate Cochrane review. We searched MEDLINE, EMBASE, and The Cochrane Central Controlled Trials Registry for relevant randomised controlled trials. The reference list of identified trials, journal supplements, relevant book chapters and conference proceedings were searched for further relevant trials. Through the EU Hernia Trialists Collaboration (EUHTC) communication took place with authors of identified randomised controlled trials to ask for information on any other recent and ongoing trials known to them. Specialists involved in research on the repair of inguinal hernia were contacted to ask for information about any further completed and ongoing trials. The world wide web was also searched. All published and unpublished randomised controlled trials and quasi-randomised controlled trials comparing laparoscopic groin hernia repair with open groin hernia repair were eligible for inclusion. Trials were included irrespective of the language in which they were reported. Individual patient data were obtained, where possible, from the responsible trialist for all eligible studies. All reanalyses were cross-checked by the reviewers and verified by the trialists before inclusion. Where IPD were unavailable additional aggregate data were sought from trialists and published aggregate data checked and verified by the trialists. IPD were available for 25 trials, additional aggregated data for seven and published data only for nine. Where possible, time to event analysis for hernia recurrence and return to usual activities were performed on an intention to treat principle. The main analyses were based on all trials. Sensitivity analyses based on the data source and trial quality were also performed. Pre-defined subgroup analyses based on recurrent hernias, bilateral hernias and femoral hernias were also carried out. 41 published reports of eligible trials were included involving 7161 participants. Sample sizes ranged from 38 to 994, with follow-up from 6 weeks to 36 months. Duration of operation was longer in the laparoscopic groups (WMD 14.81 minutes, 95% CI 13.98 to 15.64; p<0001). Operative complications were uncommon for both methods but more frequent in the laparoscopic group for visceral (Overall 8/2315 versus 1/2599) and vascular (Overall 7/2498 versus 5/2758) injuries. Length of hospital stay did not differ between groups (WMD -0.04 days, 95% CI -0.08 to 0.00; p=0.05, but return to usual activity was earlier for laparoscopic groups (HR 0.56, 95%CI 0.51 to 0.61; p<0.0001 - equivalent to 7 days). The data available showed less persisting pain (Overall 290/2101 versus 459/2399; Peto OR 0.54, 95% CI 0.46 to 0.64; p<0.0001), and less persisting numbness (Overall 102/1419 versus 217/1624; Peto OR 0.38, 95% CI 0.4286 to 0.49; p<0.0001) in the laparoscopic groups. In total, 86 recurrences were reported amongst 3138 allocated laparoscopic repair and 109 amongst 3504 allocated to open repair (Peto OR 0.81, 95% CI 0.61 to 1.08; p = 0.16). The use of mesh during laparoscopic hernia repair is associated with a reduction in the risk of hernia recurrence, significantly so for the transabdominal preperitoneal repair (TAPP) versus open non-mesh repair (overall 26/1440 versus preperitoneal repair (TAPP) versus open non-mesh repair (overall 26/1440 versus 47/1119; Peto OR 0.45, 95% CI 0.28 to 0.72; p=0.0009). However, no difference was detected when comparing laparoscopic methods with open mesh methods of hernia repair. The use of mesh during laparoscopic hernia repair is associated with a relative reduction in the risk of hernia recurrence of around 30-50%. However, there is no apparent difference in recurrence between laparoscopic and open mesh methods of hernia repair. The data suggests less persisting pain and numbness following laparoscopic repair. Return to usual activities is faster. However, operation times are longer and there appears to be a higher risk of serious complication rate in respect of visceral (especially bladder) and vascular injuries.