Veterinary Expert Opinion on Potential Drivers and Opportunities for Changing Antimicrobial Usage Practices in Livestock in Denmark, Portugal, and Switzerland 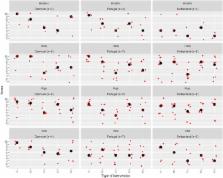 Reducing antimicrobial use (AMU) in livestock is requested by Public Health authorities. Ideally, this should be achieved without jeopardizing production output or animal health and welfare. Thus, efficient measures must be identified and developed to target drivers of AMU. Veterinarians play a central role in the identification and implementation of such efficient interventions. Sixty-seven veterinarians with expertise in livestock production in Denmark, Portugal, and Switzerland participated in an expert opinion study aimed at investigating experiences and opinions of veterinarians about the driving forces and practices related to AMU in the main livestock sectors (broiler, dairy cattle, fattening/veal calf, and pig industry) of the aforementioned countries. Opinions on potential factors influencing the choice of antimicrobials and opportunities to reduce AMU were collected. Antibiograms are seldom used, mainly due to the time lag between testing and obtaining the results. The perceived percentage of treatment failures varied between countries and livestock sectors; however, little changes were reported over time (2005−2015). The animal health problems of each livestock sector most frequently leading to AMU did not vary substantially between countries. Mandatory official interventions (i.e., binding measures applied by national or international authorities) were highlighted as having the biggest impact on AMU. There was a variation in the experts’ opinion regarding feasibility and impact of interventions both between countries and livestock sectors. Nevertheless, improved biosecurity and education of veterinarians frequently received high scores. Most veterinarians believed that AMU can be reduced. The median potential reduction estimates varied from 1% in Swiss broilers to 50% in Portuguese broilers and veal/fattening calves in all countries. We hypothesize that the differences in views could be related to disease epidemiology, animal husbandry, and socio-economic factors. A profound investigation of these disparities would provide the required knowledge for developing targeted strategies to tackle AMU and consequently resistance development. However, experts also agreed that mandatory official interventions could have the greatest impact on antimicrobial consumption. Furthermore, improvement of biosecurity and education of veterinarians, the use of zinc oxide (in pigs), improving vaccination strategies, and the creation of treatment plans were the measures considered to have the largest potential to reduce AMU. This paper can inform policymakers in Europe and countries with a similar animal production regarding their AMU policy.

Antibiotics used most commonly to treat animals in Europe

N. De Briyne, J Atkinson, L. Pokludová … (2014)
The Heads of Medicines Agencies and the Federation of Veterinarians of Europe undertook a survey to gain an insight into European prescribing of antibiotics for animals, in particular to highlight the diseases for which antibiotics are most commonly said to be prescribed and which different classes, including human critically important antibiotics (CIAs). The survey was completed by 3004 practitioners from 25 European countries. Many older antibiotics (eg, penicillins, tetracyclines) are cited most frequently as the prescribed classes to treat the main food producing species. The frequency of citation of non-CIAs predominates. CIAs are mostly frequently cited to be prescribed for: urinary diseases in cats (62 per cent), respiratory diseases in cattle (45 per cent), diarrhoea in cattle and pigs (respectively 29 per cent and 34 per cent), locomotion disorders in cattle (31 per cent), postpartum dysgalactia syndrome complex in pigs (31 per cent) and dental disease in dogs (36 per cent). Clear ‘preferences’ between countries can be observed between antibiotic classes. The use of national formularies and guidance helps to drive responsible use of antibiotics and can significantly reduce the extent of use of CIAs. A more widespread introduction of veterinary practice antibiotic prescribing policies and monitoring obedience to these should ensure more widespread compliance with responsible use guidelines.

Antibiotics in agriculture and the risk to human health: how worried should we be?

Qiuzhi Chang, Weike Wang, Gili Regev-Yochay … (2014)
The use of antibiotics in agriculture is routinely described as a major contributor to the clinical problem of resistant disease in human medicine. While a link is plausible, there are no data conclusively showing the magnitude of the threat emerging from agriculture. Here, we define the potential mechanisms by which agricultural antibiotic use could lead to human disease and use case studies to critically assess the potential risk from each. The three mechanisms considered are as follows 1: direct infection with resistant bacteria from an animal source, 2: breaches in the species barrier followed by sustained transmission in humans of resistant strains arising in livestock, and 3: transfer of resistance genes from agriculture into human pathogens. Of these, mechanism 1 is the most readily estimated, while significant is small in comparison with the overall burden of resistant disease. Several cases of mechanism 2 are known, and we discuss the likely livestock origins of resistant clones of Staphylococcus aureus and Enterococcus faecium, but while it is easy to show relatedness the direction of transmission is hard to assess in robust fashion. More difficult yet to study is the contribution of mechanism 3, which may be the most important of all.

N. De Briyne, J Atkinson, L. Pokludová … (2013)
The Heads of Medicines Agencies and the Federation of Veterinarians of Europe undertook a survey to gain a better insight into the decision-making process of veterinarians in Europe when deciding which antibiotics to prescribe. The survey was completed by 3004 practitioners from 25 European countries. Analysis was to the level of different types of practitioner (food producing (FP) animals, companion animals, equines) and country for Belgium, Czech Republic, France, Germany, Spain, Sweden and the UK. Responses indicate no single information source is universally considered critical, though training, published literature and experience were the most important. Factors recorded which most strongly influenced prescribing behaviour were sensitivity tests, own experience, the risk for antibiotic resistance developing and ease of administration. Most practitioners usually take into account responsible use warnings. Antibiotic sensitivity testing is usually performed where a treatment failure has occurred. Significant differences were observed in the frequency of sensitivity testing at the level of types of practitioners and country. The responses indicate a need to improve sensitivity tests and services, with the availability of rapid and cheaper testing being key factors.

Specialty section: This article was submitted to Veterinary Epidemiology and Economics, a section of the journal Frontiers in Veterinary Science