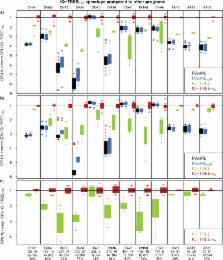 In phylogenomics the analysis of concatenated gene alignments, the so-called supermatrix, is commonly accompanied by the assumption of partition models. Under such models each gene, or more generally partition, is allowed to evolve under its own evolutionary model. Although partition models provide a more comprehensive analysis of supermatrices, missing data may hamper the tree search algorithms due to the existence of phylogenetic (partial) terraces. Here, we introduce the phylogenetic terrace aware (PTA) data structure for the efficient analysis under partition models. In the presence of missing data PTA exploits (partial) terraces and induced partition trees to save computation time. We show that an implementation of PTA in IQ-TREE leads to a substantial speedup of up to 4.5 and 8 times compared with the standard IQ-TREE and RAxML implementations, respectively. PTA is generally applicable to all types of partition models and common topological rearrangements thus can be employed by all phylogenomic inference software.

Gangolf Jobb, Arndt von Haeseler, Korbinian Strimmer (2004)
Background Most analysis programs for inferring molecular phylogenies are difficult to use, in particular for researchers with little programming experience. Results TREEFINDER is an easy-to-use integrative platform-independent analysis environment for molecular phylogenetics. In this paper the main features of TREEFINDER (version of April 2004) are described. TREEFINDER is written in ANSI C and Java and implements powerful statistical approaches for inferring gene tree and related analyzes. In addition, it provides a user-friendly graphical interface and a phylogenetic programming language. Conclusions TREEFINDER is a versatile framework for analyzing phylogenetic data across different platforms that is suited both for exploratory as well as advanced studies.

Performance of maximum parsimony and likelihood phylogenetics when evolution is heterogeneous.

Bryan Kolaczkowski, Aaron Thornton (2004)
All inferences in comparative biology depend on accurate estimates of evolutionary relationships. Recent phylogenetic analyses have turned away from maximum parsimony towards the probabilistic techniques of maximum likelihood and bayesian Markov chain Monte Carlo (BMCMC). These probabilistic techniques represent a parametric approach to statistical phylogenetics, because their criterion for evaluating a topology--the probability of the data, given the tree--is calculated with reference to an explicit evolutionary model from which the data are assumed to be identically distributed. Maximum parsimony can be considered nonparametric, because trees are evaluated on the basis of a general metric--the minimum number of character state changes required to generate the data on a given tree--without assuming a specific distribution. The shift to parametric methods was spurred, in large part, by studies showing that although both approaches perform well most of the time, maximum parsimony is strongly biased towards recovering an incorrect tree under certain combinations of branch lengths, whereas maximum likelihood is not. All these evaluations simulated sequences by a largely homogeneous evolutionary process in which data are identically distributed. There is ample evidence, however, that real-world gene sequences evolve heterogeneously and are not identically distributed. Here we show that maximum likelihood and BMCMC can become strongly biased and statistically inconsistent when the rates at which sequence sites evolve change non-identically over time. Maximum parsimony performs substantially better than current parametric methods over a wide range of conditions tested, including moderate heterogeneity and phylogenetic problems not normally considered difficult.