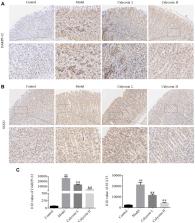 Gastric cancer is a leading cause of cancer death worldwide. In-depth research of precancerous lesions of gastric carcinoma (PLGC) with malignant transformation potential is a key measure to prevent the development of gastric carcinoma. Recently, calycosin has been shown to have anticancer effects in vitro and in vivo. The molecular mechanism by which calycosin affects PLGC, however, has not yet been elucidated. The purpose of this study was to evaluate the effect and mechanism of calycosin in N‐methyl‐ Nʹ‐nitro‐ N‐nitrosoguanidine (MNNG)-induced PLGC rats.

The effects of calycosin in the gastric mucosa of rats with PLGC were evaluated using histopathology and transmission electron microscopy (TEM). For further characterization, the expression levels of integrin β1, nuclear factor kappa B (NF-κB), p-NF-κB, DARPP-32 and signal transducer and activator of transcription 3 (STAT3) were determined by Western blot assay and immunohistochemistry.

Hematoxylin–eosin and high iron diamine–Alcian blue–periodic acid-Schiff (HID-AB-PAS) staining showed that intestinal metaplasia and dysplasia were significantly ameliorated in the calycosin intervention groups compared with the model group. Further, TEM results showed that calycosin intervention tempered microvascular abnormalities and cell morphology of primary and parietal cells in PLGC tissues. The results suggested that calycosin had gastro-protective effects in MNNG-induced PLGC rats. Western blot and immunohistochemistry analysis showed that the increased protein expression levels of NF-κB, p-NF-κB, DARPP-32 and STAT3 in the model group were downregulated by calycosin. The upregulation of integrin β1 expression induced by MNNG was decreased in the calycosin groups.

Collectively, calycosin protected against gastric mucosal injury in part via regulation of the integrin β1/NF-κB/DARPP-32 pathway and suppressed the expression of STAT3 in PLGC. The elucidation of this effect and mechanism of calycosin in PLGC provides a potential therapeutic strategy for treatment of gastric precancerous lesions.

Thorsten Hagemann,  Francisco Candido-dos-Reis (2012)
Solid tumors consist of neoplastic cells, non-malignant stromal cells, and migratory hematopoietic cells. Complex interactions between the cell types in this microenvironment regulate tumor growth, progression, metastasis, and angiogenesis. The cells and mediators of inflammation form a major part of the epithelial tumor microenvironment. In some cancers, inflammatory conditions precede development of malignancy; in others, oncogenic change drives a tumor-promoting inflammatory milieu. Whatever its origin, this "smoldering" inflammation aids proliferation and survival of malignant cells, stimulates angiogenesis and metastasis, subverts adaptive immunity, and alters response to hormones and chemotherapy. Cytokines are major mediators of communication between cells in the inflammatory tumor microenvironment. It is known that neoplastic cells often over-express proinflammatory mediators including proteases, eicosanoids, cytokines, and chemokines. Several cytokines such as macrophage migratory inhibitory factor (MIF), TNF-α, IL-6, IL-17, IL-12, IL-23, IL-10, and TGF-β have been linked with both experimental and human cancers and can either promote or inhibit tumor development. MIF is a major cytokine in many cancers and there is evidence that the cytokine is produced by both malignant cells and infiltrating leukocytes. In this article we will discuss the role of cancer-associated inflammation and the particular role of MIF in malignant disease.

Yukang Lin,  Luther Pollard (2007)
The development of a supportive vasculature is essential for tumor progression. In a mouse model of breast cancer, we found that tumor-associated macrophages that are recruited to the tumor just before malignant conversion are essential for the angiogenic switch. These findings establish a causal linkage to explain well-documented clinical correlations between macrophages, microvessel density, and poor prognosis in breast tumors.