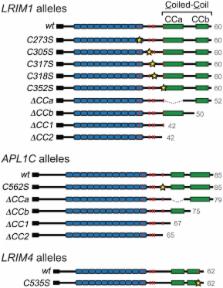 Malaria threatens half the world's population and exacts a devastating human toll. The principal malaria vector in Africa, the mosquito Anopheles gambiae , encodes 24 members of a recently identified family of leucine-rich repeat proteins named LRIMs. Two members of this family, LRIM1 and APL1C, are crucial components of the mosquito complement-like pathway that is important for immune defense against Plasmodium parasites. LRIM1 and APL1C circulate in the hemolymph exclusively as a disulfide-bonded complex that specifically interacts with the mature form of the complement C3-like protein, TEP1. We have investigated the specificity of LRIM1/APL1C complex formation and which regions of these proteins are required for interactions with TEP1. To address these questions, we have generated a set of LRIM1 and APL1C alleles altering key conserved structural elements and assayed them in cell culture for complex formation and interaction with TEP1. Our data indicate that heterocomplex formation is an intrinsic ability of LRIM1 and APL1C and identify key homologous cysteine residues forming the intermolecular disulfide bond. We also demonstrate that the coiled-coil domain is the binding site for TEP1 but also contributes to the specificity of LRIM1/APL1C complex formation. In addition, we show that the LRIM1/APL1C complex interacts with the mature forms of three other TEP proteins, one of which, TEP3, we have characterized as a Plasmodium antagonist. We conclude that LRIM1 and APL1C contain three distinct modules: a C-terminal coiled-coil domain that can carry different TEP protein cargoes, potentially with distinct functions, a central cysteine-rich region that controls complex formation and an N-terminal leucine-rich repeat with a putative role in pathogen recognition.

The malaria-transmitting mosquito, Anopheles gambiae, uses a complement-like pathway to defend against Plasmodium parasites. The complement C3-like protein, TEP1, binds to the surface of invading parasites, triggering their destruction and clearance. LRIM1 and APL1C, two leucine-rich repeat proteins, form a disulfide-bonded complex which stabilizes mature TEP1 and promotes its binding to parasites. Here, we investigate the structural and biochemical features of the LRIM1/APL1C complex and its interaction with TEP1. We identify key amino acid residues responsible for covalently linking LRIM1 and APL1C and the region of the complex where TEP1 binds. Importantly, we demonstrate that the LRIM1/APL1C complex can interact with the mature form of three other TEPs, including TEP3, which we characterize as a novel Plasmodium antagonist. Our results suggest that the LRIM1/APL1C complex has a modular architecture in which distinct functions map to different regions. Our study provides important insights into how the A. gambiae complement pathway helps mosquitoes fight against the malaria parasite.

H K Heckman,  R. Pease,  Kellie Heckman … (2006)
Extension of overlapping gene segments by PCR is a simple, versatile technique for site-directed mutagenesis and gene splicing. Initial PCRs generate overlapping gene segments that are then used as template DNA for another PCR to create a full-length product. Internal primers generate overlapping, complementary 3' ends on the intermediate segments and introduce nucleotide substitutions, insertions or deletions for site-directed mutagenesis, or for gene splicing, encode the nucleotides found at the junction of adjoining gene segments. Overlapping strands of these intermediate products hybridize at this 3' region in a subsequent PCR and are extended to generate the full-length product amplified by flanking primers that can include restriction enzyme sites for inserting the product into an expression vector for cloning purposes. The highly efficient generation of mutant or chimeric genes by this method can easily be accomplished with standard laboratory reagents in approximately 1 week.

Publisher ID: PPATHOGENS-D-10-00323
DOI: 10.1371/journal.ppat.1002023
PMC ID: 3077365
PubMed ID: 21533217
Copyright statement: Povelones et al. This is an open-access article distributed under the terms of the Creative Commons Attribution License, which permits unrestricted use, distribution, and reproduction in any medium, provided the original author and source are credited.