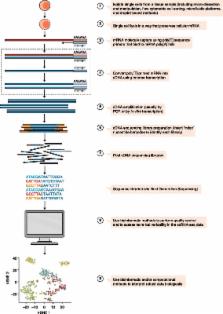 RNA sequencing (RNA-seq) is a genomic approach for the detection and quantitative analysis of messenger RNA molecules in a biological sample and is useful for studying cellular responses. RNA-seq has fueled much discovery and innovation in medicine over recent years. For practical reasons, the technique is usually conducted on samples comprising thousands to millions of cells. However, this has hindered direct assessment of the fundamental unit of biology—the cell. Since the first single-cell RNA-sequencing (scRNA-seq) study was published in 2009, many more have been conducted, mostly by specialist laboratories with unique skills in wet-lab single-cell genomics, bioinformatics, and computation. However, with the increasing commercial availability of scRNA-seq platforms, and the rapid ongoing maturation of bioinformatics approaches, a point has been reached where any biomedical researcher or clinician can use scRNA-seq to make exciting discoveries. In this review, we present a practical guide to help researchers design their first scRNA-seq studies, including introductory information on experimental hardware, protocol choice, quality control, data analysis and biological interpretation.

Alex Shalek,  Rahul Satija,  Xian Adiconis … (2013)
Recent molecular studies have revealed that, even when derived from a seemingly homogenous population, individual cells can exhibit substantial differences in gene expression, protein levels, and phenotypic output 1–5 , with important functional consequences 4,5 . Existing studies of cellular heterogeneity, however, have typically measured only a few pre-selected RNAs 1,2 or proteins 5,6 simultaneously because genomic profiling methods 3 could not be applied to single cells until very recently 7–10 . Here, we use single-cell RNA-Seq to investigate heterogeneity in the response of bone marrow derived dendritic cells (BMDCs) to lipopolysaccharide (LPS). We find extensive, and previously unobserved, bimodal variation in mRNA abundance and splicing patterns, which we validate by RNA-fluorescence in situ hybridization (RNA-FISH) for select transcripts. In particular, hundreds of key immune genes are bimodally expressed across cells, surprisingly even for genes that are very highly expressed at the population average. Moreover, splicing patterns demonstrate previously unobserved levels of heterogeneity between cells. Some of the observed bimodality can be attributed to closely related, yet distinct, known maturity states of BMDCs; other portions reflect differences in the usage of key regulatory circuits. For example, we identify a module of 137 highly variable, yet co-regulated, antiviral response genes. Using cells from knockout mice, we show that variability in this module may be propagated through an interferon feedback circuit involving the transcriptional regulators Stat2 and Irf7. Our study demonstrates the power and promise of single-cell genomics in uncovering functional diversity between cells and in deciphering cell states and circuits.

Sarah Teichmann,  Simon Anders,  Valentina Proserpio … (2013)
Single-cell RNA-seq can yield valuable insights about the variability within a population of seemingly homogeneous cells. We developed a quantitative statistical method to distinguish true biological variability from the high levels of technical noise in single-cell experiments. Our approach quantifies the statistical significance of observed cell-to-cell variability in expression strength on a gene-by-gene basis. We validate our approach using two independent data sets from Arabidopsis thaliana and Mus musculus.

Characterization of the single-cell transcriptional landscape by highly multiplex RNA-seq.

Saiful Islam,  Annalena Moliner,  Peter Lönnerberg … (2011)
Our understanding of the development and maintenance of tissues has been greatly aided by large-scale gene expression analysis. However, tissues are invariably complex, and expression analysis of a tissue confounds the true expression patterns of its constituent cell types. Here we describe a novel strategy to access such complex samples. Single-cell RNA-seq expression profiles were generated, and clustered to form a two-dimensional cell map onto which expression data were projected. The resulting cell map integrates three levels of organization: the whole population of cells, the functionally distinct subpopulations it contains, and the single cells themselves-all without need for known markers to classify cell types. The feasibility of the strategy was demonstrated by analyzing the transcriptomes of 85 single cells of two distinct types. We believe this strategy will enable the unbiased discovery and analysis of naturally occurring cell types during development, adult physiology, and disease.