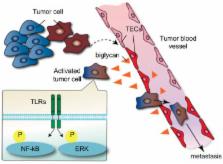 Tumor progression depends on the process of angiogenesis, which is the formation of new blood vessels. These newly formed blood vessels supply oxygen and nutrients to the tumor, supporting its progression and providing a gateway for tumor metastasis. Tumor angiogenesis is regulated by the balance between angiogenic activators and inhibitors within the tumor microenvironment. Because the newly formed tumor blood vessels originate from preexisting normal vessels, tumor blood vessels, and tumor endothelial cells (TECs) have historically been considered to be the same as normal blood vessels and endothelial cells; however, evidence of TECs’ distinctive abnormal phenotypes has increased. In addition, it has been revealed that TECs constitute a heterogeneous population. Thus, TECs that line tumor blood vessels are important targets in cancer therapy. We have previously reported that TECs induce cancer metastasis. In this review, we describe recent studies on TEC abnormalities related to cancer progression to provide insight into new anticancer therapies.

Lisa Damico,  Jacques Gaudreault,  W Novotny … (2004)
To investigate the efficacy and safety of bevacizumab plus carboplatin and paclitaxel in patients with advanced or recurrent non-small-cell lung cancer. In a phase II trial, 99 patients were randomly assigned to bevacizumab 7.5 (n = 32) or 15 mg/kg (n = 35) plus carboplatin (area under the curve = 6) and paclitaxel (200 mg/m(2)) every 3 weeks or carboplatin and paclitaxel alone (n = 32). Primary efficacy end points were time to disease progression and best confirmed response rate. On disease progression, patients in the control arm had the option to receive single-agent bevacizumab 15 mg/kg every 3 weeks. Compared with the control arm, treatment with carboplatin and paclitaxel plus bevacizumab (15 mg/kg) resulted in a higher response rate (31.5% v 18.8%), longer median time to progression (7.4 v 4.2 months) and a modest increase in survival (17.7 v 14.9 months). Of the 19 control patients that crossed over to single-agent bevacizumab, five experienced stable disease, and 1-year survival was 47%. Bleeding was the most prominent adverse event and was manifested in two distinct clinical patterns; minor mucocutaneous hemorrhage and major hemoptysis. Major hemoptysis was associated with squamous cell histology, tumor necrosis and cavitation, and disease location close to major blood vessels. Bevacizumab in combination with carboplatin and paclitaxel improved overall response and time to progression in patients with advanced or recurrent non-small-cell lung cancer. Patients with nonsquamous cell histology appear to be a subpopulation with improved outcome and acceptable safety risks.