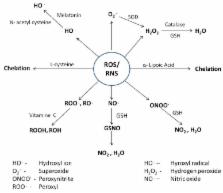 Heavy metals, which have widespread environmental distribution and originate from natural and anthropogenic sources, are common environmental pollutants. In recent decades, their contamination has increased dramatically because of continuous discharge in sewage and untreated industrial effluents. Because they are non-degradable, they persist in the environment; accordingly, they have received a great deal of attention owing to their potential health and environmental risks. Although the toxic effects of metals depend on the forms and routes of exposure, interruptions of intracellular homeostasis include damage to lipids, proteins, enzymes and DNA via the production of free radicals. Following exposure to heavy metals, their metabolism and subsequent excretion from the body depends on the presence of antioxidants (glutathione, α-tocopherol, ascorbate, etc.) associated with the quenching of free radicals by suspending the activity of enzymes (catalase, peroxidase, and superoxide dismutase). Therefore, this review was written to provide a deep understanding of the mechanisms involved in eliciting their toxicity in order to highlight the necessity for development of strategies to decrease exposure to these metals, as well as to identify substances that contribute significantly to overcome their hazardous effects within the body of living organisms.

The role of antioxidants in the chemistry of oxidative stress: A review.

Aurelia Pisoschi,  Aneta Pop (2015)
This Review Article is focused on the action of the reactive oxygenated species in inducing oxidative injury of the lipid membrane components, as well as on the ability of antioxidants (of different structures and sources, and following different mechanisms of action) in fighting against oxidative stress. Oxidative stress is defined as an excessive production of reactive oxygenated species that cannot be counteracted by the action of antioxidants, but also as a perturbation of cell redox balance. Reactive oxygenated/nitrogenated species are represented by superoxide anion radical, hydroxyl, alkoxyl and lipid peroxyl radicals, nitric oxide and peroxynitrite. Oxidative stress determines structure modifications and function modulation in nucleic acids, lipids and proteins. Oxidative degradation of lipids yields malondialdehyde and 4-hydroxynonenal, but also isoprostanes, from unsaturated fatty acids. Protein damage may occur with thiol oxidation, carbonylation, side-chain oxidation, fragmentation, unfolding and misfolding, resulting activity loss. 8-hydroxydeoxyguanosine is an index of DNA damage. The involvement of the reactive oxygenated/nitrogenated species in disease occurrence is described. The unbalance between the oxidant species and the antioxidant defense system may trigger specific factors responsible for oxidative damage in the cell: over-expression of oncogene genes, generation of mutagen compounds, promotion of atherogenic activity, senile plaque occurrence or inflammation. This leads to cancer, neurodegeneration, cardiovascular diseases, diabetes, kidney diseases. The concept of antioxidant is defined, along with a discussion of the existent classification criteria: enzymatic and non-enzymatic, preventative or repair-systems, endogenous and exogenous, primary and secondary, hydrosoluble and liposoluble, natural or synthetic. Primary antioxidants are mainly chain breakers, able to scavenge radical species by hydrogen donation. Secondary antioxidants are singlet oxygen quenchers, peroxide decomposers, metal chelators, oxidative enzyme inhibitors or UV radiation absorbers. The specific mechanism of action of the most important representatives of each antioxidant class (endogenous and exogenous) in preventing or inhibiting particular factors leading to oxidative injury in the cell, is then reviewed. Mutual influences, including synergistic effects are presented and discussed. Prooxidative influences likely to occur, as for instance in the presence of transition metal ions, are also reminded.

Mark T D Cronin,  Alan H Morris,  M Valko (2004)
Metal-induced toxicity and carcinogenicity, with an emphasis on the generation and role of reactive oxygen and nitrogen species, is reviewed. Metal-mediated formation of free radicals causes various modifications to DNA bases, enhanced lipid peroxidation, and altered calcium and sulfhydryl homeostasis. Lipid peroxides, formed by the attack of radicals on polyunsaturated fatty acid residues of phospholipids, can further react with redox metals finally producing mutagenic and carcinogenic malondialdehyde, 4-hydroxynonenal and other exocyclic DNA adducts (etheno and/or propano adducts). Whilst iron (Fe), copper (Cu), chromium (Cr), vanadium (V) and cobalt (Co) undergo redox-cycling reactions, for a second group of metals, mercury (Hg), cadmium (Cd) and nickel (Ni), the primary route for their toxicity is depletion of glutathione and bonding to sulfhydryl groups of proteins. Arsenic (As) is thought to bind directly to critical thiols, however, other mechanisms, involving formation of hydrogen peroxide under physiological conditions, have been proposed. The unifying factor in determining toxicity and carcinogenicity for all these metals is the generation of reactive oxygen and nitrogen species. Common mechanisms involving the Fenton reaction, generation of the superoxide radical and the hydroxyl radical appear to be involved for iron, copper, chromium, vanadium and cobalt primarily associated with mitochondria, microsomes and peroxisomes. However, a recent discovery that the upper limit of "free pools" of copper is far less than a single atom per cell casts serious doubt on the in vivo role of copper in Fenton-like generation of free radicals. Nitric oxide (NO) seems to be involved in arsenite-induced DNA damage and pyrimidine excision inhibition. Various studies have confirmed that metals activate signalling pathways and the carcinogenic effect of metals has been related to activation of mainly redox-sensitive transcription factors, involving NF-kappaB, AP-1 and p53. Antioxidants (both enzymatic and non-enzymatic) provide protection against deleterious metal-mediated free radical attacks. Vitamin E and melatonin can prevent the majority of metal-mediated (iron, copper, cadmium) damage both in vitro systems and in metal-loaded animals. Toxicity studies involving chromium have shown that the protective effect of vitamin E against lipid peroxidation may be associated rather with the level of non-enzymatic antioxidants than the activity of enzymatic antioxidants. However, a very recent epidemiological study has shown that a daily intake of vitamin E of more than 400 IU increases the risk of death and should be avoided. While previous studies have proposed a deleterious pro-oxidant effect of vitamin C (ascorbate) in the presence of iron (or copper), recent results have shown that even in the presence of redox-active iron (or copper) and hydrogen peroxide, ascorbate acts as an antioxidant that prevents lipid peroxidation and does not promote protein oxidation in humans in vitro. Experimental results have also shown a link between vanadium and oxidative stress in the etiology of diabetes. The impact of zinc (Zn) on the immune system, the ability of zinc to act as an antioxidant in order to reduce oxidative stress and the neuroprotective and neurodegenerative role of zinc (and copper) in the etiology of Alzheimer's disease is also discussed. This review summarizes recent findings in the metal-induced formation of free radicals and the role of oxidative stress in the carcinogenicity and toxicity of metals.

Harry Ischiropoulos,  Rafael Radi,  Csaba Szabo (2007)
Peroxynitrite--the product of the diffusion-controlled reaction of nitric oxide with superoxide radical--is a short-lived oxidant species that is a potent inducer of cell death. Conditions in which the reaction products of peroxynitrite have been detected and in which pharmacological inhibition of its formation or its decomposition have been shown to be of benefit include vascular diseases, ischaemia-reperfusion injury, circulatory shock, inflammation, pain and neurodegeneration. In this Review, we first discuss the biochemistry and pathophysiology of peroxynitrite and then focus on pharmacological strategies to attenuate the toxic effects of peroxynitrite. These include its catalytic reduction to nitrite and its isomerization to nitrate by metalloporphyrins, which have led to potential candidates for drug development for cardiovascular, inflammatory and neurodegenerative diseases.