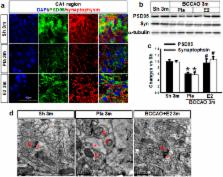 Jenine Harris,  Jennifer Bourne (2008)
Dendritic spines are the primary recipients of excitatory input in the central nervous system. They provide biochemical compartments that locally control the signaling mechanisms at individual synapses. Hippocampal spines show structural plasticity as the basis for the physiological changes in synaptic efficacy that underlie learning and memory. Spine structure is regulated by molecular mechanisms that are fine-tuned and adjusted according to developmental age, level and direction of synaptic activity, specific brain region, and exact behavioral or experimental conditions. Reciprocal changes between the structure and function of spines impact both local and global integration of signals within dendrites. Advances in imaging and computing technologies may provide the resources needed to reconstruct entire neural circuits. Key to this endeavor is having sufficient resolution to determine the extrinsic factors (such as perisynaptic astroglia) and the intrinsic factors (such as core subcellular organelles) that are required to build and maintain synapses.

Eszter Farkas,  Ferenc Bari,  P G Luiten (2007)
Chronic cerebral hypoperfusion has been associated with cognitive decline in aging and Alzheimer's disease. Moreover, the pattern of cerebral blood flow in mild cognitive impairment has emerged as a predictive marker for the progression into Alzheimer's disease. The reconstruction of a pathological condition in animal models is a suitable approach to the unraveling of causal relationships. For this reason, permanent, bilateral occlusion of the common carotid arteries (2VO) in rats has been established as a procedure to investigate the effects of chronic cerebral hypoperfusion on cognitive dysfunction and neurodegenerative processes. Over the years, the 2VO model has generated a large amount of data, revealing the 2VO-related pattern of cerebral hypoperfusion and metabolic changes, learning and memory disturbances, failure of neuronal signaling, and the neuropathological changes in the hippocampus. In addition, the model has been introduced in research into ischemic white matter injury and ischemic eye disease. The present survey sets out to provide a comprehensive summary of the achievements made with the 2VO model, and a critical evaluation and integration of the various results, and to relate the experimental data to human diseases. The data that have accumulated from use of the 2VO model in the rat permit an understanding of the causative role played by cerebral hypoperfusion in neurodegenerative diseases. Thorough characterization of the model suggests that 2VO in the rat is suitable for the development of potentially neuroprotective strategies in neurodegenerative diseases.

Krishnan M Dhandapani,  Darrell W. Brann,  H V Mahesh … (2007)
Estrogen is an important hormone signal that regulates multiple tissues and functions in the body. This review focuses on the neurotrophic and neuroprotective actions of estrogen in the brain, with particular emphasis on estrogen actions in the hippocampus, cerebral cortex and striatum. Sex differences in the risk, onset and severity of neurodegenerative disease such as Alzheimer's disease, Parkinson's disease and stroke are well known, and the potential role of estrogen as a neuroprotective factor is discussed in this context. The review assimilates a complex literature that spans research in humans, non-human primates and rodent animal models and attempts to contrast and compare the findings across species where possible. Current controversies regarding the Women's Health Initiative (WHI) study, its ramifications, concerns and the new studies needed to address these concerns are also addressed. Signaling mechanisms underlying estrogen-induced neuroprotection and synaptic plasticity are reviewed, including the important concepts of genomic versus nongenomic mechanisms, types of estrogen receptor involved and their subcellular targeting, and implicated downstream signaling pathways and mediators. Finally, a multicellular mode of estrogen action in the regulation of neuronal survival and neurotrophism is discussed, as are potential future directions for the field.