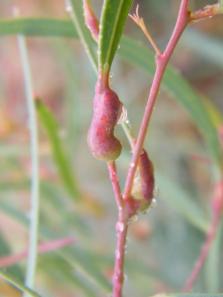 Leptocybe invasa Fisher & La Salle (Hymenoptera, Eulophidae) is an invasive pest in Eucalyptus plantations throughout the world. Potential biological control agents for L. invasa were investigated in the Fujian, Guangdong, Hainan, Guangxi, Jiangxi, and Sichuan provinces of China, where Eucalyptus spp. have been severely damaged by the eucalyptus gall wasp. Three hymenopteran parasitoids of L. invasa were identified: Quadrastichus mendeli Kim & La Salle (Eulophidae), Aprostocetus causalis La Salle & Wu (Eulophidae), and Megastigmus viggianii Narendran & Sureshan (Torymidae); M. viggianii is newly recorded in China. The percentages of parasitization by Q. mendeli, A. causalis, and M. viggianii were 2.96%–19.53%, 2.30%–26.38%, and 24.93%, respectively. The longevity and body length of females were significantly greater than for males in A. causalis and M. viggianii. No males of Q. mendeli were found in China. These parasitoids could be used as biological agents for L. invasa in China.

Genetic Diversity of the Invasive Gall Wasp Leptocybe invasa (Hymenoptera: Eulophidae) and of its Rickettsia Endosymbiont, and Associated Sex-Ratio Differences

Francesco Nugnes,  Marco Gebiola,  Maurilia Maria Monti … (2015)
The blue-gum chalcid Leptocybe invasa Fisher & LaSalle (Hymenoptera: Eulophidae) is a gall wasp pest of Eucalyptus species, likely native to Australia. Over the past 15 years it has invaded 39 countries on all continents where eucalypts are grown. The worldwide invasion of the blue gum chalcid was attributed to a single thelytokous morphospecies formally described in 2004. Subsequently, however, males have been recorded in several countries and the sex ratio of field populations has been found to be highly variable in different areas. In order to find an explanation for such sex ratio differences, populations of L. invasa from a broad geographical area were screened for the symbionts currently known as reproductive manipulators, and both wasps and symbionts were genetically characterized using multiple genes. Molecular analyses suggested that L. invasa is in fact a complex of two cryptic species involved in the rapid and efficient spread of the wasp, the first recovered from the Mediterranean region and South America, the latter from China. All screened specimens were infected by endosymbiotic bacteria belonging to the genus Rickettsia. Two closely related Rickettsia strains were found, each infecting one of the two putative cryptic species of L. invasa and associated with different average sex ratios. Rickettsia were found to be localized in the female reproductive tissues and transovarially transmitted, suggesting a possible role of Rickettsia as the causal agent of thelytokous parthenogenesis in L. invasa. Implications for the variation of sex ratio and for the management of L. invasa are discussed.

First report of the Eucalyptus gall wasp, Ophelimus maskelli (Hymenoptera: Eulophidae), an invasive pest on Eucalyptus, from the Western Hemisphere.