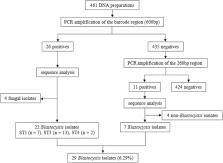 Blastocystis is one of the most common intestinal parasites in humans worldwide. To understand its prevalence and to explore the risk factors for Blastocystis in humans in developing countries, a molecular epidemiological investigation of Blastocystis was conducted in ethnic minority groups on both sides of the China–Myanmar border. A total of 461 fecal specimens were collected from 289 Yao people in China and 172 Wa people in Myanmar, together with a questionnaire for each participant. Based on sequence analysis of the partial small subunit of ribosomal RNA (SSU rRNA) gene (barcode region or 260 bp region), an average prevalence of 6.29% (29/461) was observed, with 4.50% (13/289) in Yao people and 9.30% (16/172) in Wa people. Twenty-two Blastocystis isolates were successfully subtyped by sequence analysis of the barcode region. Three subtypes were identified: ST1 ( n = 7), ST3 ( n = 13) and ST4 ( n = 2). A statistical difference in the prevalence of Blastocystis was only observed between children (12.37%, 12/97) and adults (4.95%, 16/323), and between not washing hands (11.02%, 14/127) and washing hands (4.76%, 15/315) after using toilets, emphasizing the importance and necessity of health education in people in the investigated areas, especially in children.

Kevin S W Tan (2008)
Blastocystis is an unusual enteric protozoan parasite of humans and many animals. It has a worldwide distribution and is often the most commonly isolated organism in parasitological surveys. The parasite has been described since the early 1900s, but only in the last decade or so have there been significant advances in our understanding of Blastocystis biology. However, the pleomorphic nature of the parasite and the lack of standardization in techniques have led to confusion and, in some cases, misinterpretation of data. This has hindered laboratory diagnosis and efforts to understand its mode of reproduction, life cycle, prevalence, and pathogenesis. Accumulating epidemiological, in vivo, and in vitro data strongly suggest that Blastocystis is a pathogen. Many genotypes exist in nature, and recent observations indicate that humans are, in reality, hosts to numerous zoonotic genotypes. Such genetic diversity has led to a suggestion that previously conflicting observations on the pathogenesis of Blastocystis are due to pathogenic and nonpathogenic genotypes. Recent epidemiological, animal infection, and in vitro host-Blastocystis interaction studies suggest that this may indeed be the case. This review focuses on such recent advances and also provides updates on laboratory and clinical aspects of Blastocystis spp.

Kaitlin C Clark,  Blessing Tawari,  M. T. Scicluna (2006)
We have developed a simple method for subtyping the intestinal protistan parasite Blastocystis using an approach equivalent to DNA barcoding in animals. Amplification of a 600 bp region of the small subunit ribosomal RNA gene followed by single primer sequencing of the PCR product provides enough data to assign isolates to specific subtypes unambiguously. We believe that this approach will prove useful in future epidemiological studies.

The microbial eukaryote Blastocystis is a prevalent and diverse member of the healthy human gut microbiota.

Pauline D. Scanlan,  Christen R Stensvold,  Mirjana Rajilic-Stojanovic … (2014)
To date, the majority of research into the human gut microbiota has focused on the bacterial fraction of the community. Inevitably, this has resulted in a poor understanding of the diversity and functionality of other intestinal microorganisms in the human gut. One such nonbacterial member is the microbial eukaryote Blastocystis, which has been implicated in the aetiology of a range of different intestinal and extra-intestinal diseases. However, prevalence data from different studies are conflicting, and crucially, there is limited information on its incidence and diversity in healthy individuals. Here, we survey the prevalence, genetic diversity and temporal stability of Blastocystis in a group of healthy adults (n = 105) using a sensitive PCR assay. Blastocystis was present in 56% of our sample set, which is much higher than previously reported from an industrialised county (Ireland). Moreover, a diversity of different subtypes (species) were detected, and Blastocystis was present in a subset of individuals sampled over a period of time between 6 and 10 years, indicating that it is capable of long-term host colonisation. These results show that Blastocystis is a common and diverse member of the healthy gut microbiota, thereby extending our knowledge of the microbial ecology of the healthy human intestine.