The gastric microbiome, its interaction with Helicobacter pylori, and its potential role in the progression to stomach cancer 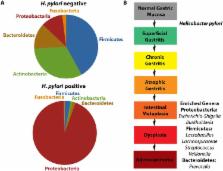 Anders F. Andersson, Mathilda Lindberg, Hedvig Jakobsson … (2008)
Humans host complex microbial communities believed to contribute to health maintenance and, when in imbalance, to the development of diseases. Determining the microbial composition in patients and healthy controls may thus provide novel therapeutic targets. For this purpose, high-throughput, cost-effective methods for microbiota characterization are needed. We have employed 454-pyrosequencing of a hyper-variable region of the 16S rRNA gene in combination with sample-specific barcode sequences which enables parallel in-depth analysis of hundreds of samples with limited sample processing. In silico modeling demonstrated that the method correctly describes microbial communities down to phylotypes below the genus level. Here we applied the technique to analyze microbial communities in throat, stomach and fecal samples. Our results demonstrate the applicability of barcoded pyrosequencing as a high-throughput method for comparative microbial ecology.

Jun-Ling Ma, Lian Zhang, Linda Brown … (2012)
In the Shandong Intervention Trial, 2 weeks of antibiotic treatment for Helicobacter pylori reduced the prevalence of precancerous gastric lesions, whereas 7.3 years of oral supplementation with garlic extract and oil (garlic treatment) or vitamin C, vitamin E, and selenium (vitamin treatment) did not. Here we report 14.7-year follow-up for gastric cancer incidence and cause-specific mortality among 3365 randomly assigned subjects in this masked factorial placebo-controlled trial. Conditional logistic regression was used to estimate the odds of gastric cancer incidence, and the Cox proportional hazards model was used to estimate the relative hazard of cause-specific mortality. All statistical tests were two-sided. Gastric cancer was diagnosed in 3.0% of subjects who received H pylori treatment and in 4.6% of those who received placebo (odds ratio = 0.61, 95% confidence interval = 0.38 to 0.96, P = .032). Gastric cancer deaths occurred among 1.5% of subjects assigned H pylori treatment and among 2.1% of those assigned placebo (hazard ratio [HR] of death = 0.67, 95% CI = 0.36 to 1.28). Garlic and vitamin treatments were associated with non-statistically significant reductions in gastric cancer incidence and mortality. Vitamin treatment was associated with statistically significantly fewer deaths from gastric or esophageal cancer, a secondary endpoint (HR = 0.51, 95% CI = 0.30 to 0.87; P = .014).

The authors would like to acknowledge support from the following NIH grants: R01CA077955 (RMP), R01DK058587 (RMP), P01CA116087 (RMP). The funders had no role in study design, data collection and analysis, decision to publish, or preparation of the manuscript.