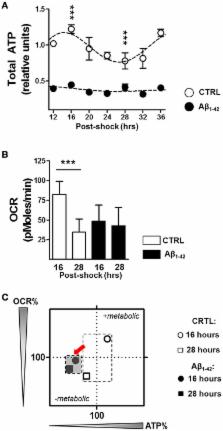 Ageing is an inevitable biological process that results in a progressive structural and functional decline, as well as biochemical alterations that altogether lead to reduced ability to adapt to environmental changes. As clock oscillations and clock-controlled rhythms are not resilient to the aging process, aging of the circadian system may also increase susceptibility to age-related pathologies such as Alzheimer's disease (AD). Besides the amyloid-beta protein (Aβ)-induced metabolic decline and neuronal toxicity in AD, numerous studies have demonstrated that the disruption of sleep and circadian rhythms is one of the common and earliest signs of the disease. In this study, we addressed the questions of whether Aβ contributes to an abnormal molecular circadian clock leading to a bioenergetic imbalance. For this purpose, we used different oscillator cellular models: human skin fibroblasts, human glioma cells, as well as mouse primary cortical and hippocampal neurons. We first evaluated the circadian period length, a molecular clock property, in the presence of different Aβ species. We report here that physiologically relevant Aβ 1–42 concentrations ranging from 10 to 500 nM induced an increase of the period length in human skin fibroblasts, human A172 glioma cells as well as in mouse primary neurons whereas the reverse control peptide Aβ 42-1, which is devoid of toxic action, did not influence the circadian period length within the same concentration range. To better understand the underlying mechanisms that are involved in the Aβ-related alterations of the circadian clock, we examined the cellular metabolic state in the human primary skin fibroblast model. Notably, under normal conditions, ATP levels displayed circadian oscillations, which correspond to the respective circadian pattern of mitochondrial respiration. In contrast, Aβ 1–42 treatment provoked a strong dampening in the metabolic oscillations of ATP levels as well as mitochondrial respiration and in addition, induced an increased oxidized state. Overall, we gain here new insights into the deleterious cycle involved in Aβ-induced decay of the circadian rhythms leading to metabolic deficits, which may contribute to the failure in mitochondrial energy metabolism associated with the pathogenesis of AD.

M Greicius,  G Srivastava,  A Reiss … (2004)
Recent functional imaging studies have revealed coactivation in a distributed network of cortical regions that characterizes the resting state, or default mode, of the human brain. Among the brain regions implicated in this network, several, including the posterior cingulate cortex and inferior parietal lobes, have also shown decreased metabolism early in the course of Alzheimer's disease (AD). We reasoned that default-mode network activity might therefore be abnormal in AD. To test this hypothesis, we used independent component analysis to isolate the network in a group of 13 subjects with mild AD and in a group of 13 age-matched elderly controls as they performed a simple sensory-motor processing task. Three important findings are reported. Prominent coactivation of the hippocampus, detected in all groups, suggests that the default-mode network is closely involved with episodic memory processing. The AD group showed decreased resting-state activity in the posterior cingulate and hippocampus, suggesting that disrupted connectivity between these two regions accounts for the posterior cingulate hypometabolism commonly detected in positron emission tomography studies of early AD. Finally, a goodness-of-fit analysis applied at the individual subject level suggests that activity in the default-mode network may ultimately prove a sensitive and specific biomarker for incipient AD.

Coordinated transcription of key pathways in the mouse by the circadian clock.

Satchidananda Panda,  Marina P. Antoch,  Brooke H. Miller … (2002)
In mammals, circadian control of physiology and behavior is driven by a master pacemaker located in the suprachiasmatic nuclei (SCN) of the hypothalamus. We have used gene expression profiling to identify cycling transcripts in the SCN and in the liver. Our analysis revealed approximately 650 cycling transcripts and showed that the majority of these were specific to either the SCN or the liver. Genetic and genomic analysis suggests that a relatively small number of output genes are directly regulated by core oscillator components. Major processes regulated by the SCN and liver were found to be under circadian regulation. Importantly, rate-limiting steps in these various pathways were key sites of circadian control, highlighting the fundamental role that circadian clocks play in cellular and organismal physiology.

Amyloid-beta dynamics are regulated by orexin and the sleep-wake cycle.

Edson Fujiki,  David Holtzman,  Jae-Eun Miller … (2009)
Amyloid-beta (Abeta) accumulation in the brain extracellular space is a hallmark of Alzheimer's disease. The factors regulating this process are only partly understood. Abeta aggregation is a concentration-dependent process that is likely responsive to changes in brain interstitial fluid (ISF) levels of Abeta. Using in vivo microdialysis in mice, we found that the amount of ISF Abeta correlated with wakefulness. The amount of ISF Abeta also significantly increased during acute sleep deprivation and during orexin infusion, but decreased with infusion of a dual orexin receptor antagonist. Chronic sleep restriction significantly increased, and a dual orexin receptor antagonist decreased, Abeta plaque formation in amyloid precursor protein transgenic mice. Thus, the sleep-wake cycle and orexin may play a role in the pathogenesis of Alzheimer's disease.

This article was submitted to Neuroendocrine Science, a section of the journal Frontiers in Neuroscience