Significant Artifact Reduction at 1.5T and 3T MRI by the Use of a Cochlear Implant with Removable Magnet: An Experimental Human Cadaver Study 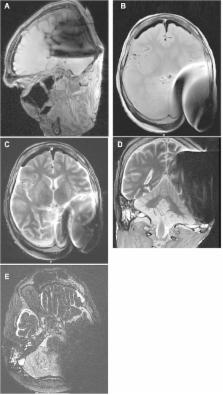 Three criteria (diagnostic usefulness, image quality, artifacts) were assessed at 1.5T and 3T in five cadaver heads with CI. The brain magnetic resonance scans were performed with and without the magnet in situ. The criteria were analyzed by two blinded neuroradiologists, with focus on image distortion and limitation of the diagnostic value of the acquired MR images.

MR images with the magnet in situ were all compromised by artifacts caused by the CI. After removal of the magnet, MR scans showed an unequivocal artifact reduction with significant improvement of the image quality and diagnostic usefulness, both at 1.5T and 3T. Visibility of the brain stem, cerebellopontine angle, and parieto-occipital lobe ipsilateral to the CI increased significantly after magnet removal.

John Niparko,  Patricia Crane,  Michael Kraut … (2010)
To assess the safety of 1.5 T magnetic resonance imaging (MRI) in patients with cochlear implants (CIs) with internal magnets. Retrospective review of CI patients who underwent an MRI at Johns Hopkins. Sixteen patients with a mean age of 43 ± 22 years with a CI underwent a total of 22 clinically indicated 1.5 T MRI. Devices from 3 major CI manufactures were represented. Binding of CI with mold material and gauze was performed before MRI. Some patients were also administered a sedative. Intravenous gadolinium contrast was used in all but 1 patient. Patients were assessed with regard to the ability to complete the MRI, the size of the artifact caused by the device, the ability to make a diagnosis from the studies, the post-MRI CI function, and the magnet's position. No CI malfunction, displacement, or magnet displacement was observed after MRI. One patient was unable to tolerate the procedure because of pressure at the site of the device. One patient required intravenous sedation to complete the study. The CI generally produced an artifact on brain MRI, with a mean maximal anterior-posterior dimension of 6.6 cm and a lateral dimension of 4.8 cm around the site of the device. The contralateral internal auditory canal was visualized in all patients, and the ipsilateral internal auditory canal was at least party visible in all but 1 patient. Patients can safely undergo 1.5 T MRI after CI if the device is tightly bound before scanning. Magnet displacement was not observed, and we think the risk to be minimal compared with the risk and inconvenience of removing the magnet before the study.

Imaging of intralabyrinthine schwannomas: a retrospective study of 52 cases with emphasis on lesion growth.

R Kuhweide,  J Ghekiere,  E Offeciers … (2008)
Only a few case reports and small series of intralabyrinthine schwannomas (ILSs) have been reported. The purpose of this study was to assess prevalence, MR characteristics, location, clinical management, and growth potential/patterns of ILSs in the largest series reported. Lesion localization, MR characteristics, lesion growth, and clinical management were reviewed in 52 patients diagnosed with an ILS between February 1991 and August 2007 in 2 referral centers. The number of ILSs and vestibulocochlear schwannomas in the cerebellopontine angle/internal auditory canal was compared to assess the prevalence. ILSs most frequently originate intracochlearly, are hyperintense on unenhanced T1-weighted images, enhance strongly after gadolinium administration, and are sharply circumscribed and hypointense on thin heavily T2-weighted 3D images. The scala tympani is more frequently or more extensively involved than the scala vestibuli. Follow-up MR imaging, available in 27 patients, showed growth in 59% of subjects. Growth was seen from the scala tympani into the scala vestibuli and from the scala vestibuli to the saccule and vice versa. Twelve lesions were resected, and the diagnosis of ILS histopathologically confirmed. ILSs can account for up to 10% of all vestibulocochlear schwannomas in centers specializing in temporal bone imaging, grow in more than 50%, and are most frequently found intracochlearly, often anteriorly between the basal and second turn. Cochlear ILSs most often originate in the scala tympani and only later grow into the scala vestibuli. Growth can occur from the cochlea into the vestibule or vice versa through the anatomic open connection between the perilymphatic spaces in the scala vestibuli and around the saccule.

Nicolas Leboulanger,  Isabelle Rouillon,  Nathalie Loundon … (2008)
Magnet displacement is a rare but possible complication in patients with cochlear implants. We report 1 case in a young child that occurred during magnetic resonance imaging scanning, despite precautionary measures taken by the surgeon and the radiographer. Retrospective case report. This case is presented by the ENT Department of Armand Trousseau Paediatrics Hospital, Paris, France. An 8-year-old child, implanted with a Freedom Contour Nucleus cochlear implant, was referred for a 1.5-T cerebral magnetic resonance imaging because of a progressive neurologic disorder. This rare complication underlines the importance of risk information and preventive measures required, even in case of compatible devices, for performing a magnetic resonance imaging examination in patients wearing a cochlear implant with removable magnet.