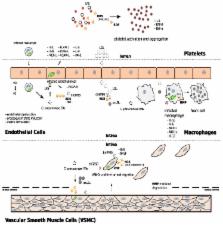 Chlamydia pneumoniae, an obligate intracellular pathogen, is known as a leading cause of respiratory tract infections and, in the last two decades, has been widely associated with atherosclerosis by seroepidemiological studies, and direct detection of the microorganism within atheroma. C. pneumoniae is presumed to play a role in atherosclerosis for its ability to disseminate via peripheral blood mononuclear cells, to replicate and persist within vascular cells, and for its pro-inflammatory and angiogenic effects. Once inside the vascular tissue, C. pneumoniae infection has been shown to induce the production of reactive oxygen species in all the cells involved in atherosclerotic process such as macrophages, platelets, endothelial cells, and vascular smooth muscle cells, leading to oxidative stress. The aim of this review is to summarize the data linking C. pneumoniae-induced oxidative stress to atherosclerotic lesion development.

Daniel Rader,  J-S Joyal,  Christopher Cannon … (2004)
Lipid-lowering therapy with statins reduces the risk of cardiovascular events, but the optimal level of low-density lipoprotein (LDL) cholesterol is unclear. We enrolled 4162 patients who had been hospitalized for an acute coronary syndrome within the preceding 10 days and compared 40 mg of pravastatin daily (standard therapy) with 80 mg of atorvastatin daily (intensive therapy). The primary end point was a composite of death from any cause, myocardial infarction, documented unstable angina requiring rehospitalization, revascularization (performed at least 30 days after randomization), and stroke. The study was designed to establish the noninferiority of pravastatin as compared with atorvastatin with respect to the time to an end-point event. Follow-up lasted 18 to 36 months (mean, 24). The median LDL cholesterol level achieved during treatment was 95 mg per deciliter (2.46 mmol per liter) in the standard-dose pravastatin group and 62 mg per deciliter (1.60 mmol per liter) in the high-dose atorvastatin group (P<0.001). Kaplan-Meier estimates of the rates of the primary end point at two years were 26.3 percent in the pravastatin group and 22.4 percent in the atorvastatin group, reflecting a 16 percent reduction in the hazard ratio in favor of atorvastatin (P=0.005; 95 percent confidence interval, 5 to 26 percent). The study did not meet the prespecified criterion for equivalence but did identify the superiority of the more intensive regimen. Among patients who have recently had an acute coronary syndrome, an intensive lipid-lowering statin regimen provides greater protection against death or major cardiovascular events than does a standard regimen. These findings indicate that such patients benefit from early and continued lowering of LDL cholesterol to levels substantially below current target levels. Copyright 2004 Massachusetts Medical Society

Chlamydial persistence: beyond the biphasic paradigm.

Interaction of chlamydiae and host cells in vitro.

J W Moulder (1991)
The obligately intracellular bacteria of the genus Chlamydia, which is only remotely related to other eubacterial genera, cause many diseases of humans, nonhuman mammals, and birds. Interaction of chlamydiae with host cells in vitro has been studied as a model of infection in natural hosts and as an example of the adaptation of an organism to an unusual environment, the inside of another living cell. Among the novel adaptations made by chlamydiae have been the substitution of disulfide-bond-cross-linked polypeptides for peptidoglycans and the use of host-generated nucleotide triphosphates as sources of metabolic energy. The effect of contact between chlamydiae and host cells in culture varies from no effect at all to rapid destruction of either chlamydiae or host cells. When successful infection occurs, it is usually followed by production of large numbers of progeny and destruction of host cells. However, host cells containing chlamydiae sometimes continue to divide, with or without overt signs of infection, and chlamydiae may persist indefinitely in cell cultures. Some of the many factors that influence the outcome of chlamydia-host cell interaction are kind of chlamydiae, kind of host cells, mode of chlamydial entry, nutritional adequacy of the culture medium, presence of antimicrobial agents, and presence of immune cells and soluble immune factors. General characteristics of chlamydial multiplication in cells of their natural hosts are reproduced in established cell lines, but reproduction in vitro of the subtle differences in chlamydial behavior responsible for the individuality of the different chlamydial diseases will require better in vitro models.