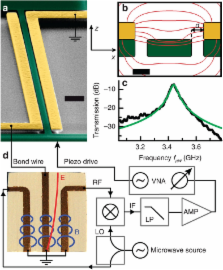 Following recent insights into energy storage and loss mechanisms in nanoelectromechanical systems (NEMS), nanomechanical resonators with increasingly high quality factors are possible. Consequently, efficient, non-dissipative transduction schemes are required to avoid the dominating influence of coupling losses. Here we present an integrated NEMS transducer based on a microwave cavity dielectrically coupled to an array of doubly clamped pre-stressed silicon nitride beam resonators. This cavity-enhanced detection scheme allows resolving of the resonators' Brownian motion at room temperature while preserving their high mechanical quality factor of 290,000 at 6.6 MHz. Furthermore, our approach constitutes an 'opto'-mechanical system in which backaction effects of the microwave field are employed to alter the effective damping of the resonators. In particular, cavity-pumped self-oscillation yields a linewidth of only 5 Hz. Thereby, an adjustement-free, all-integrated and self-driven nanoelectromechanical resonator array interfaced by just two microwave connectors is realised, which is potentially useful for applications in sensing and signal processing. 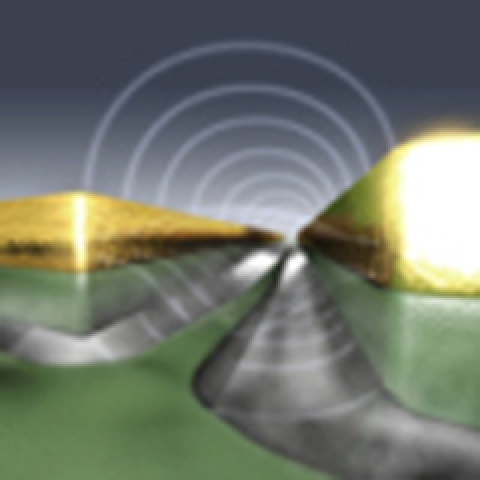 Quantum ground state and single-phonon control of a mechanical resonator.

John Martinis,  Radoslaw Bialczak,  D. Sank … (2010)
Quantum mechanics provides a highly accurate description of a wide variety of physical systems. However, a demonstration that quantum mechanics applies equally to macroscopic mechanical systems has been a long-standing challenge, hindered by the difficulty of cooling a mechanical mode to its quantum ground state. The temperatures required are typically far below those attainable with standard cryogenic methods, so significant effort has been devoted to developing alternative cooling techniques. Once in the ground state, quantum-limited measurements must then be demonstrated. Here, using conventional cryogenic refrigeration, we show that we can cool a mechanical mode to its quantum ground state by using a microwave-frequency mechanical oscillator-a 'quantum drum'-coupled to a quantum bit, which is used to measure the quantum state of the resonator. We further show that we can controllably create single quantum excitations (phonons) in the resonator, thus taking the first steps to complete quantum control of a mechanical system.

Laser cooling of a nanomechanical oscillator into its quantum ground state

Jeff Hill,  Amir Safavi-Naeini,  Alex Krause … (2011)
A patterned Si nanobeam is formed which supports co-localized acoustic and optical resonances that are coupled via radiation pressure. Starting from a bath temperature of T=20K, the 3.68GHz nanomechanical mode is cooled into its quantum mechanical ground state utilizing optical radiation pressure. The mechanical mode displacement fluctuations, imprinted on the transmitted cooling laser beam, indicate that a final phonon mode occupancy of 0.85 +-0.04 is obtained.

Dale Li,  T Donner,  J. D. Whittaker … (2011)
The advent of laser cooling techniques revolutionized the study of many atomic-scale systems. This has fueled progress towards quantum computers by preparing trapped ions in their motional ground state, and generating new states of matter by achieving Bose-Einstein condensation of atomic vapors. Analogous cooling techniques provide a general and flexible method for preparing macroscopic objects in their motional ground state, bringing the powerful technology of micromechanics into the quantum regime. Cavity opto- or electro-mechanical systems achieve sideband cooling through the strong interaction between light and motion. However, entering the quantum regime, less than a single quantum of motion, has been elusive because sideband cooling has not sufficiently overwhelmed the coupling of mechanical systems to their hot environments. Here, we demonstrate sideband cooling of the motion of a micromechanical oscillator to the quantum ground state. Entering the quantum regime requires a large electromechanical interaction, which is achieved by embedding a micromechanical membrane into a superconducting microwave resonant circuit. In order to verify the cooling of the membrane motion into the quantum regime, we perform a near quantum-limited measurement of the microwave field, resolving this motion a factor of 5.1 from the Heisenberg limit. Furthermore, our device exhibits strong-coupling allowing coherent exchange of microwave photons and mechanical phonons. Simultaneously achieving strong coupling, ground state preparation and efficient measurement sets the stage for rapid advances in the control and detection of non-classical states of motion, possibly even testing quantum theory itself in the unexplored region of larger size and mass.